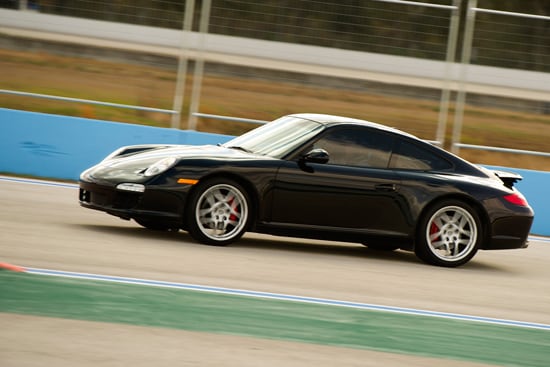 The folks over at the Richard Petty Driving Experience invited me to an event yesterday at the Walt Disney World Resort Speedway and the funniest thing happened: I fell in love. When I first saw her she was just sitting there, dressed all in yellow. She looked Italian and exotic and, without a doubt, it was love at first sight.

“She” is a sleek, bright yellow 562-horsepower Lamborghini Gallardo – just one of the handful of “supercars” that guests can drive as part of the new Exotic Driving Experience that is being offered by Petty Holdings at the speedway. The experience officially debuts on Monday, but the kind folks over there gave a few of us a chance to get behind the wheel a little early.

This was easily one of the coolest things I have ever done, a real bucket list kind of thing. Put it this way, if Michael Jordan were a car, he’d be a Lamborghini (0-60 mph in 3.7 seconds and costs $220,000). The acceleration, the handling, the traction and, thank God, the braking are unlike anything I have ever experienced in a car. And it was even more evident when Brazilian race car driver Christian Fittipaldi took me for a spin in a black Ferrari 458 – we were doing 130 mph through a high-banked turn while passing mere inches from the wall yet the car felt like it was glued to the road. I’m not sure I’ll ever be able to go back to just driving my little car ever again.

The Exotic Driving Experience offers the chance to drive a Ferrari 458 Italia, Porsche 997 S and Audi R8 in addition to two types of Lamborghinis, with more supercar models coming in the future. Prices range between $199-$389 for six laps depending on which model you choose.

For me, I’m sticking with my girl, the Lamborghini Gallardo, even though I swear that red Ferrari kept making eyes at me as I left the speedway.