Lesley Ann Warren recently visited Disneyland park with her family and there was something special I thought she would like to see in New Orleans Square. Costume sketches from the 1967 Disney film, “The Happiest Millionaire,” in which she made her motion picture debut, have been added to the art collection on display inside Club 33 and we arranged for her to come take a look and share some of her own special Disney memories. 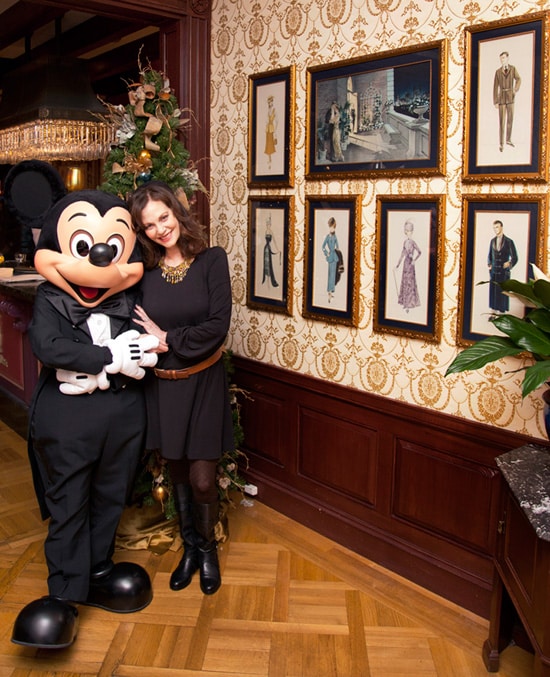 Lesley Ann and her family were greeted warmly by Mickey Mouse when they arrived. Then, in the middle of all the hugs and laughter, she caught a glimpse of the costume sketches hanging on the wall behind her and instantly recognized her character, Cordy, in the upper left corner, excitedly telling her family, “That’s me! This was my very first movie!” Sketches of Bill Thomas’ Academy Award-nominated Costume Design aren’t the only nod to “The Happiest Millionaire” inside Club 33. Emil Kuri, who personally helped Walt Disney select antiques and decorative items for the Club, was also the Set Decorator on the film, so it should come as no surprise that the telephone booth in the Club was adapted directly from the one in the Biddle’s foyer from the movie. While the phone booth in the movie appears larger than the one in Club 33, certain pieces such as the beveled glass windows and parts of the carved wood molding are identical, and were most likely taken from the original film prop.

Lesley Ann graciously agreed to sit down with me for a brief chat about her memories of making “The Happiest Millionaire,” working with Walt Disney, and of her (almost) first visit to Disneyland park. 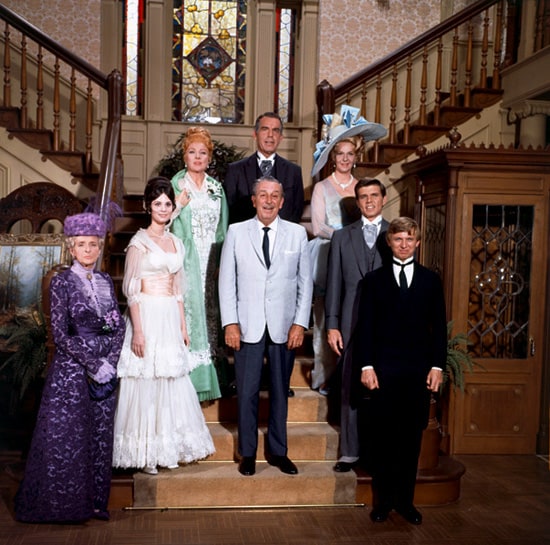 George Savvas: What was it like to be cast by Walt Disney in your first film?

Lesley Ann Warren: When I did “The Happiest Millionaire,” I had a two-week Hollywood screen test with costumes and make-up and hair and learning the choreography and the music and the songs and then he (Walt Disney) picked me to do this which was an incredible honor. 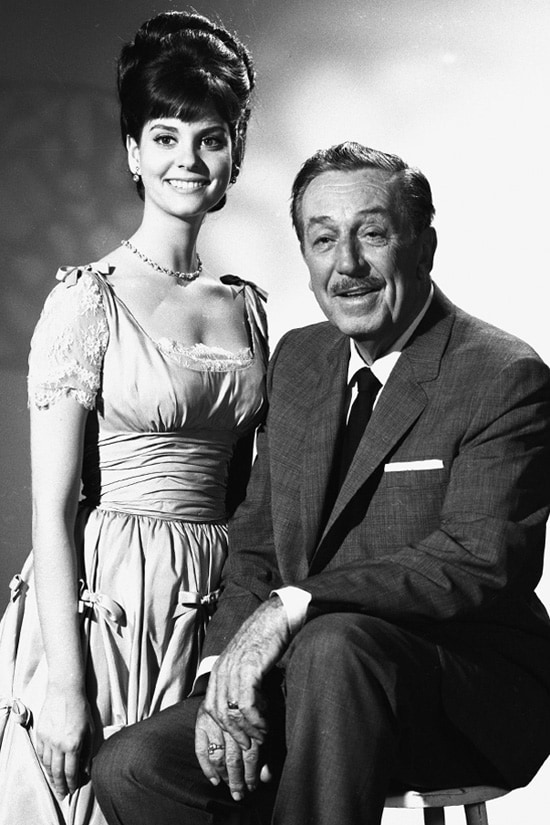 George Savvas: What were your impressions of Walt Disney?

Lesley Ann Warren: He was the ultimate. He was very quiet on the set when he would visit, but you always knew when he was there. He knew everything – he knew what color hair ribbon I had on, as well as what they were serving in the commissary, as well as what the animators were doing with their projects, I mean his influence and inspiration and taste, was everywhere. I was invited to his home for dinner one night with his wife and some of the cast. I was so awe struck I don’t think I said three words during the whole evening! 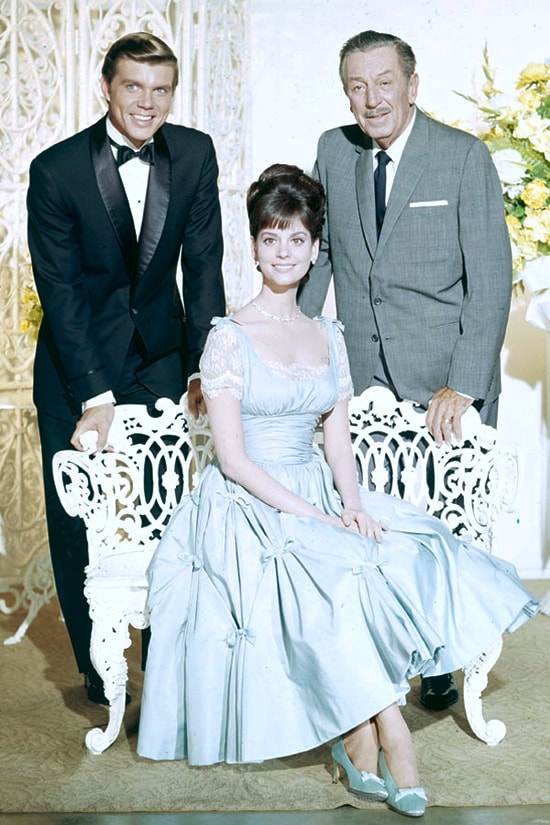 George Savvas: After “The Happiest Millionaire” you had another project with Disney, and that was during a difficult time at the Studio. What can you tell me about that period?

Lesley Ann Warren: I was under contract to Walt Disney and the Studio, and I was supposed to do my second film which was, “The One and Only, Genuine, Original Family Band,” and he passed away just before we began. It was an enormous tragedy, obviously for the world, but for those of us who were so involved with him, the loss of him put a pall over everything. There was such a sadness, you know, it was pervasive, but because we were all so dedicated to fulfilling his vision we threw ourselves into the making of that second film and had a glorious time in the making of it because we were carrying on his tradition. 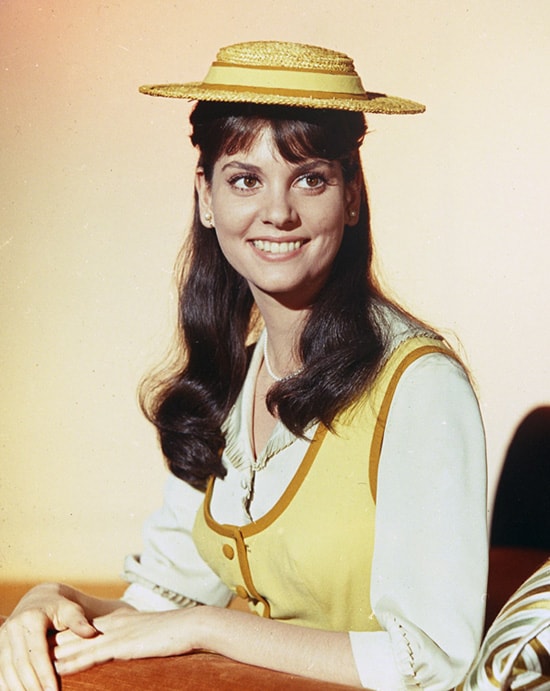 George Savvas: What was your first Disney film premiere like?

Lesley Ann Warren: I mean it was a crazy time for me. They did this monumental opening for “The Happiest Millionaire” with a red carpet down the entire Hollywood Boulevard starting from Highland to the Pantages. We arrived in carriages you know the same kind of carriages that were in the film. It was so much for such a young girl.

George Savvas: Do you remember the first time you visited one of our parks?

Lesley Ann Warren: I remember my first experience coming here to Disneyland. I was married to Jon Peters at the time. I was making “The Happiest Millionaire,” and we got invited to come to Disneyland, and they wouldn’t let him in because his hair was too long! (Laughs)

They wouldn’t let him in and he was, you know, very stubborn. He wouldn’t pull his hair back. He wouldn’t cut his hair, so it was an interesting conversation that ensued, but, yeah, that was my very first time! (Laughs)

About 10 years ago, you did a musical celebration here honoring Walt Disney’s birthday and I was here for that. Of course I’ve been back many, many times, but that was also a wonderful memory for me because I brought my whole family and we stayed at Disney’s Grand Californian Hotel.

George Savvas: What memories are you looking forward to making during this visit?

Lesley Ann Warren: Well, I’m here with my husband and his daughter and her fiancé and his two young children, so… we want to do everything! This is the little ones’ first time at Disneyland, so we’re seeing it through their eyes. It’s really exciting.