“I am glad to be at Disney World, the Magic Kingdom!” 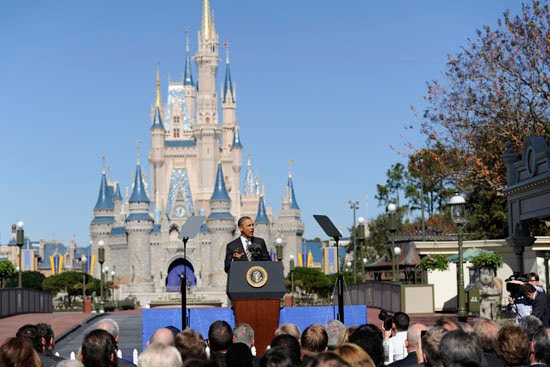 This was the spirited welcome President Barack Obama delivered earlier today as he stood on Main Street, U.S.A., with the iconic Cinderella Castle glittering behind him.

Tourism was the topic of this official visit, and the President said the natural place to discuss efforts to make it easier for more international guests to visit the United States was Walt Disney World Resort.

“It’s rare that I get to do something that Sasha and Malia envy me for,” the President joked, referring to his young daughters. “Maybe they’ll actually ask me at dinner how my day went.” 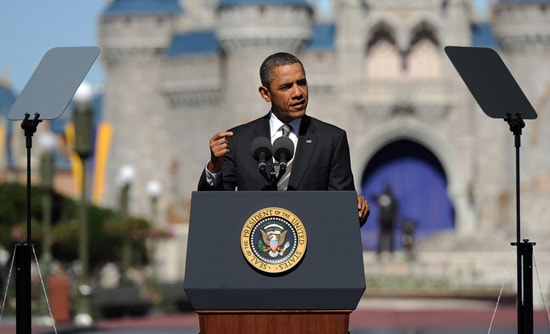 While the President’s remarks were for an invited audience and necessitated closing a portion of Main Street, U.S.A., for a few hours, guests at Magic Kingdom Park enjoyed a unique day of their own, with special entertainment throughout the park to keep things magical.

Instead of venturing down Main Street, U.S.A., to access the park, guests were ushered from the main entrance through a special backstage area that was lined with scores of colorful banners and parade floats and live musical entertainment. Once inside the park, guests could enjoy additional entertainment, character meet-and-greets, supplemental showings of the Frontierland Hoedown and character dance parties at the Diamond Horseshoe Review and the Rockettower Plaza Stage.

A capacity crowd of guests who wanted to hear the President’s speech even watched a live broadcast of his remarks in the most appropriate of settings – The Hall of Presidents attraction in Liberty Square.

Back on Main Street, U.S.A., President Obama finished his remarks, then turned to look at the “Partners” statue in distance. The President gave a friendly wave to Walt and Mickey, then exited the stage to end this historic day at the Magic Kingdom.