More Fun Surprises in Store for ‘The Magic, The Memories and You!’ at Disney Parks

One of the true delights of the recent holiday season at Disney Parks was a special segment during our evening projection show, “The Magic, The Memories and You!” The faces of Cinderella Castle at Magic Kingdom Park and “it’s a small world” at Disneyland park were transformed into gingerbread masterpieces, brightly colored packages and palaces of ice. 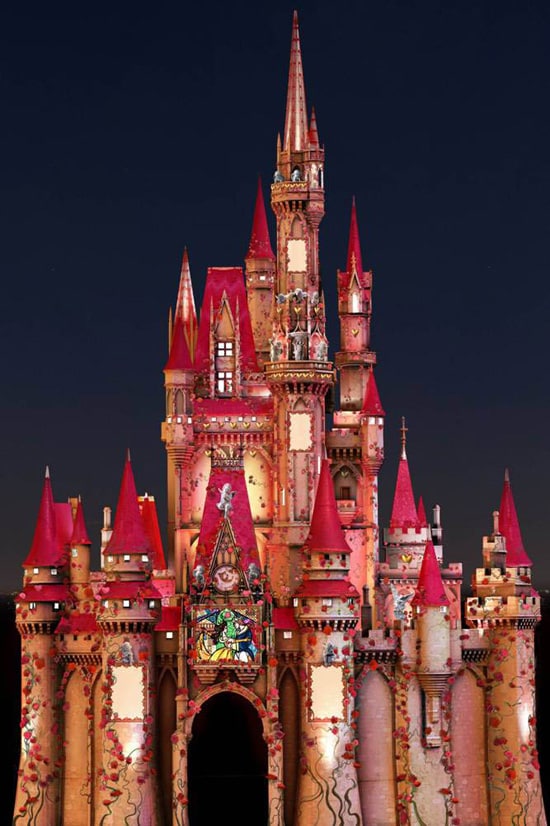 Well if you enjoyed that, our Creative Entertainment team has another treat in store, just in time for Valentine’s Day! A new show segment is set to debut Feb. 1, inspired by some of the most romantic moments in Disney animation. Cinderella Castle and “it’s a small world” will be covered in red roses for one sequence and turned into a beautiful, star-filled sky for another. During part of the show, spectacular stained glass windows will grace the façades, depicting the stories of Cinderella, Snow White and Belle.

One of my favorite moments comes when the king and queen from “Tangled” appear on a balcony, lifting a single lantern to the sky for their missing daughter. It’s soon joined by hundreds of others, creating a magical sight sure to draw “oohs” and “ahhs” from the crowd. It gives me goosebumps just thinking about it! Of course, the most heart-warming part of any segment of “The Magic, The Memories and You!” is the images of our guests, captured by Disney PhotoPass photographers during the day and incorporated into the show each night.

The romance segment is planned to run as part of “The Magic, The Memories and You!” through mid-April but we’re not stopping there. Wait until you see “it’s a small world” as a sand castle in a segment we’re working on for summer. It’s chock full of detail… right up to the point where Goofy rides a wave across the façade, washing it all away to reveal… well, I don’t want to spoil all the surprises!

Likes (0)
Share More Fun Surprises in Store for ‘The Magic, The Memories and You!’ at Disney Parks