Wildlife Wednesdays: Play Disney’s ‘Where’s My Water?’ and Help Protect Fresh Water for People and Animals Around the World

Disney Friends for Change and the Disney Worldwide Conservation Fund (DWCF) invite you to join us in helping to protect fresh water for people and animals around the world. As part of the Every Duck Counts campaign, Disney Friends for Change and DWCF are donating $50,000 to Conservation International’s freshwater efforts and encouraging “Where’s My Water?” players to collect as many ducks as possible in the game to raise awareness about the importance of clean water. 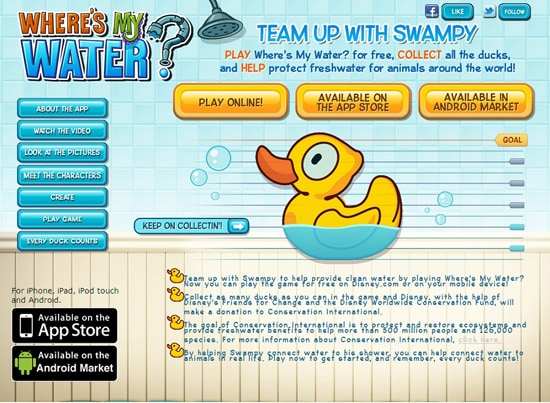 Between now through the end of February, anyone playing the free online or mobile versions of “Where’s My Water?” will learn freshwater facts, what all of us can do to save water, and about species that depend on fresh water in Conservation International’s project areas. Conservation International’s freshwater initiative strives to protect and restore freshwater sources that support some 126,000 animal species and more than 500 million people.

“Where’s My Water?” is a fun, simple – yet challenging – physics-based puzzle game featuring Swampy the Alligator and his quest to access clean water so he can take a shower.