It’s been quite a February to remember for multi-platinum music star Kelly Clarkson. On Feb. 5, the Grammy Award-winning singer performed “The Star Spangled Banner” at the NFL championship game in Indianapolis. Just a few days later, her newest single – “Stronger (What Doesn’t Kill You)” – soared to the coveted number one spot on the “Billboard Hot 100” songs chart. Then, on Feb. 12 she joined country music artist Jason Aldean to perform their hit song, “Don’t You Wanna Stay,” during the 54th annual GRAMMY Awards telecast.

What did she do next? She went to Disney World! 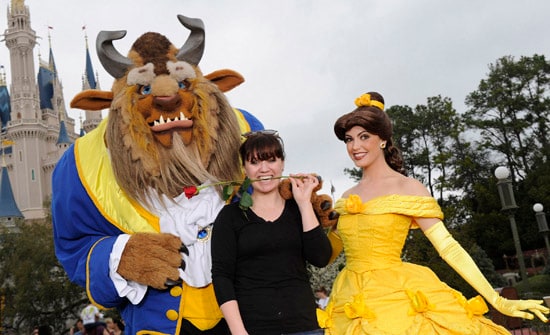 Kelly joined family and friends in our theme parks yesterday, pausing for a moment to pose in the famed Magic Kingdom “Rose Garden” with a couple that knows a thing or two about roses – Belle and Beast. And from the looks of this snapshot, it seems that Belle, Beast and Kelly all enjoyed “A Moment Like This.”