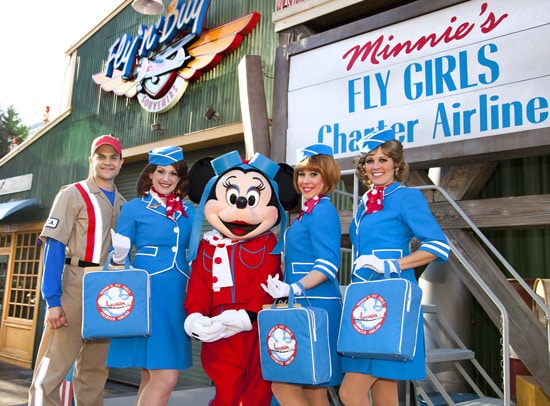 “Minnie’s Fly Girls Charter Airline” opens for business today at Disney California Adventure park. This tune-filled “travelogue” of song, dance and audience interaction takes place in Condor Flats, across from Soarin’ Over California, featuring songs from the ‘40s, ‘50s and ‘60s in a colorful new show sure to appeal to the young and young at heart.

Creating something to delight multiple generations was a central focus during production and a personal passion of the creative team. Senior Writer Carolyn Gardner said, “I’ve been surrounded by pilots ever since I can remember. My dad was a private pilot [and] flight instructor, my mom flew her own ‘solo’ flight, my big brother worked at our local airfield and my cousin’s an air traffic controller. I hope audiences feel their own hearts take wing when the show’s flight crew launches into the fun-filled, flight-themed songs.” 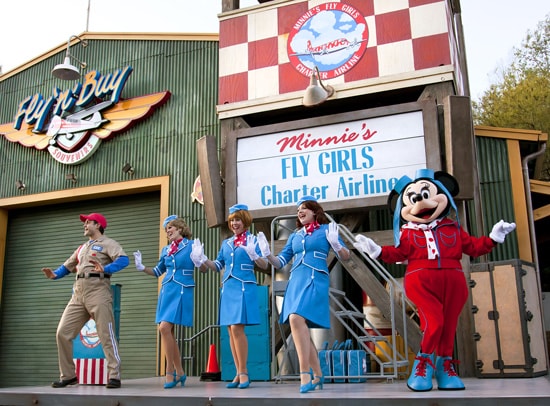 “Come Fly with Me,” originally performed by Frank Sinatra, introduces the crew – Amanda, Pat, Kate and Lee – to all their potential “passengers” (the audience). Minnie makes her grand entrance during “Straighten up and Fly Right,” a hit song by Nat King Cole. The performance also includes two medleys, incorporating a number of other musical favorites. “Destination Medley” is a fun, ‘round-the-world collection of standards such as “Brazil,” “I Love Paris” and “Lady of Spain.” The Disney “Flying Medley” is an uplifting blend of Disney tunes, including “Let’s Go Fly a Kite” and “When I See an Elephant Fly.”

Art Director Brian Sandahl’s challenge was to design a stage that doesn’t look like a stage. “When the show is not being performed, the stage fits nicely into the aged look of Condor Flats, and you’d almost not even notice it,” says Brian. “The décor for the stage looks very industrial, very much like found objects you would see in Condor Flats; however, when the show begins, a common flight sign becomes the ‘show sign,’ a steel drum magically becomes a check in counter and an old trunk becomes a prop trunk for the many props in this show.”

The music, costumes and props send this latest addition to Disney California Adventure park soaring to new heights. You’ll definitely want to “book a flight” with “Minnie’s Fly Girls Charter Airline” on your next visit!

Be sure to check the park Entertainment Guide for show times.