Before the band took the stage, “Jake and the Never Land Pirate Band” Meet-Up guests visited with the stars of the show – Jake, Captain Hook and Mr. Smee – in an exclusive meet-and-greet opportunity. Pirate games throughout the room gave our partying pirates the chance to test their skill at essential pirate tasks like firing the cannon! 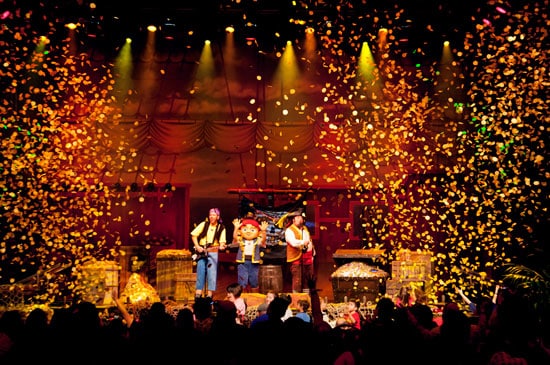 During the concert, Sharky and Bones performed some of their popular tunes from “Jake and the Never Land Pirates,” and also treated the meet-up guests to two brand-new pirate rock songs, “Gold Dubloons” and “Rattle Yer Bones.” Jake, Captain Hook and Mr. Smee even joined the band onstage for a few numbers and danced with the pint-sized pirates in the “Pirate Pit” in front of the stage.

After the performance, Sharky and Bones stuck around to greet their fans and sign autographs. Meet-up guests were also invited to spend the rest of the day at Disney California Adventure park, where they received a private, exclusive showing of “Disney Junior – Live on Stage!” and FASTPASSes to the evening’s performance of “World of Color.”

Each guest also left with a copy of the “Jake and the Never Land Pirates” soundtrack, courtesy of Walt Disney Records! Check out the video below to see all the fun. Yarr!!

Keep an eye on the Disney Parks Blog for the chance to join us at our next meet-up!