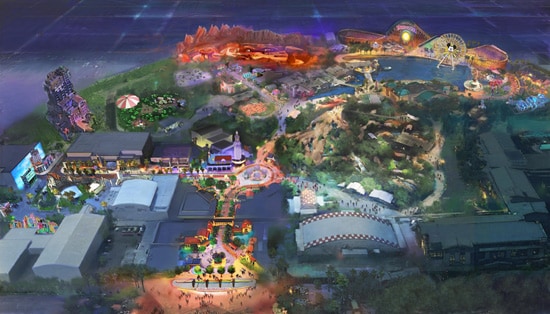 Today marks the 11th anniversary of Disney California Adventure park, and we’ve got some exciting news to share! When the expansion of the park is complete this summer, guests will have a total of eight themed lands to explore. With the addition of two new areas — Buena Vista Street and Cars Land — and slight changes to the names of some existing areas, the total number of themed lands will increase to eight and include:

As you already know, each of these lands will be filled with even more to do and see at Disney California Adventure park, including Mad T Party and Ghirardelli Soda Fountain and Chocolate Shop. All of these new lands and experiences will cap off a five-year expansion which has included the addition of Toy Story Mania!, Mickey’s Fun Wheel, “World of Color,” Silly Symphony Swings, The Little Mermaid ~ Ariel’s Undersea Adventure, Goofy’s Sky School, Paradise Garden Grill and Boardwalk Pizza and Pasta.

The new themed lands will be added to guide maps when the expansion is complete this summer. In the meantime, keep an eye on the Disney Parks Blog for continued updates on all the new experiences coming to Disney California Adventure park!