In February 1960, Walt Disney joined a newly formed executive council dedicated to filling the growing need for a children’s hospital in Orange County, California. Fundraising came to fruition and dedication turned to development with Children’s Hospital of Orange County first opening its doors in 1964. Since then, the relationship between the Disneyland Resort and CHOC has continued to grow. 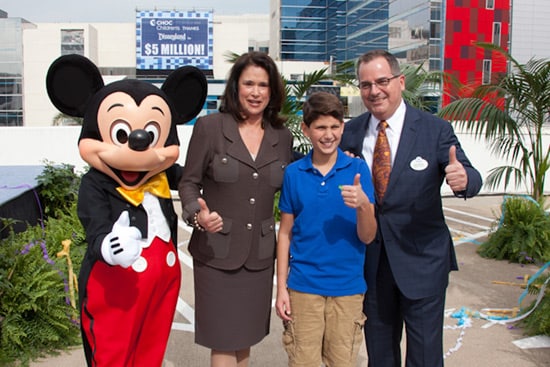 This morning, 52 years after Walt helped secure donations for their first building, the Disneyland Resort announced a charitable contribution of $5 million toward CHOC Children’s fundraising goals for their newest building!

CHOC Children’s state-of-the-art, seven-story tower is set to open in spring 2013. It will feature fun and engaging experiences for all CHOC visitors on the second-floor lobby where Imagineers and Disneyland Resort cast members are currently working on some very magical designs.

As a company with 22,000 cast members in Southern California, many of whom have utilized the services at CHOC, we are bound together by much more than just proximity.

It’s about our shared history …starting with Walt Disney more than five decades ago.

It’s about our present relationship … maintaining a great bond through sustainable programs like the CHOC Walk, efforts from our Disney VoluntEARS and charitable donations like this one.

And it’s about our future together … supporting not only the building of a new tower, but the vision of building a stronger community with our friends at CHOC Children’s.