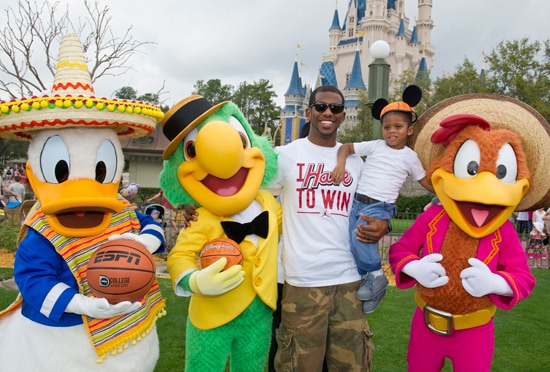 While the hoops spotlight is on Orlando this weekend for the 2012 NBA All-Star Game, Central Florida will see a few more stars as pro basketball’s best begin arriving for the weekend festivities.

Los Angeles Clippers guard Chris Paul, one of the starters for the Western Conference All-Stars in Sunday’s game, didn’t waste any time during the All-Star break to bring his family to Walt Disney World Resort. After leading the Clippers last night with a season-high 36 points in the team’s 103-95 victory over the Denver Nuggets, Paul hopped on an overnight flight from L.A. and made a beeline to Walt Disney World Resort so he could enjoy some Magic Kingdom Park fun today with his young son, Chris.

Paul and his son posed for this picture with The Three Caballeros, a nod to Paul’s famous nickname, “CP3.”

Paul and the Clippers hit this year’s All-Star break with a 20-11 record and currently stand alone in first place in the NBA’s Pacific Division.

It could be a sign of foreshadowing that he posed in front of Cinderella Castle for today’s photo. If he and his team keep playing like they are, at the end of the season the Clippers just might be wearing a slipper – as in glass slipper – as the NBA’s “Cinderella story” team.