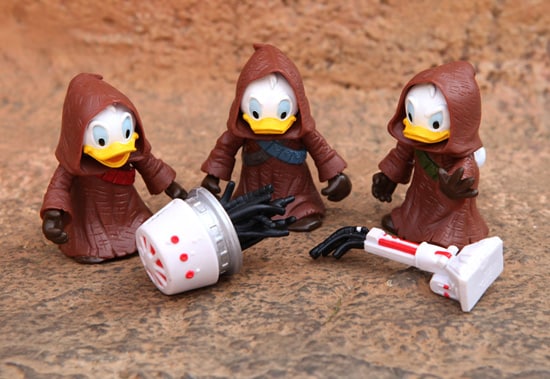 New action figures featuring Disney characters playing characters from the Star Wars universe are due to arrive at Disney Parks in March. We first showed artwork of these figures in August 2010 (good things come to those who wait!). I spoke with Cody Hampton, developer for Toys and Games, to learn about their development.

“We’ve been working on the wave five figures for more than two years,” explained Cody. “We originally wanted to release them last year at Star Wars Weekends. With so much great new development for Star Tours: The Adventures Continue at that time, we pushed out [the action figures] release date to spring 2012. I’m thrilled to see these figures arriving soon as they are some of my favorites.” 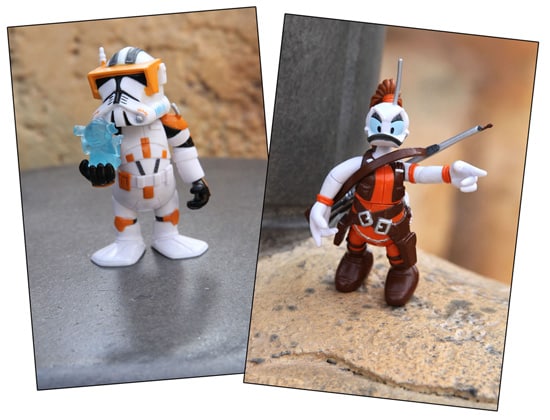 Cody has been involved with development of the Disney character Star Wars action figures since series three. His favorite figure in the series is Donald Duck as the Clone Trooper, Commander Cody (how fitting!). I like Donald Duck’s nephews as Jawas (probably because I dressed like a Jawa for Halloween when I was five – still my favorite costume of all time).

Disney Design Group artist Mike Sullivan drew the first sketches for the characters in this series. Then senior character artist Casey Jones used those sketches to create the technical drawings shared with the manufacturer. Cody explained that collaboration between Disney and Lucasfilm was a key ingredient for success. 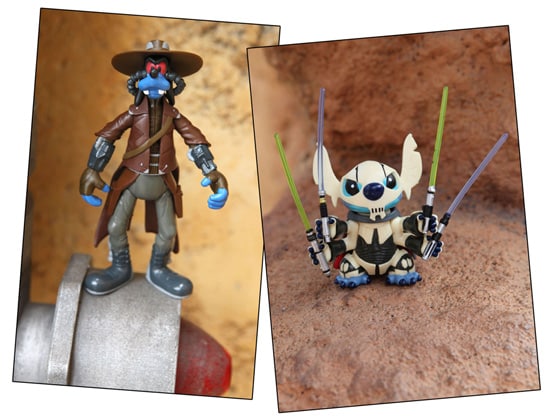 “The Lucasfilm team was great collaborative partners,” said Cody. “We first thought Stitch would be perfect to play the bounty hunter Cad Bane from ‘Star Wars: The Clone Wars’ animated series because he had blue skin like Bane’s character. The Lucasfilm team suggested turning Goofy blue to play Bane and save Stitch for General Grievous. In the end, this worked better from a character design since Stitch has four arms like Grievous’ character.” The figures will be released at locations in Disneyland Resort and Walt Disney World Resort. Unfortunately, they will not be available via the Disney Parks Online Store. If you aren’t visiting the parks soon, you can also contact Walt Disney Parks and Resorts Merchandise Guest Services at 1-877-560-6477 or email merchandiseguestservices@disney.go.com once they are released.

May the Force be with you!