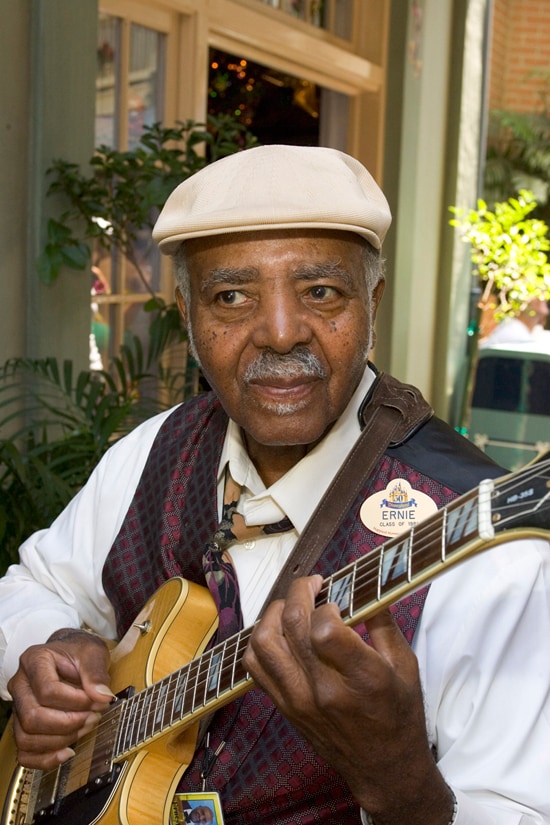 Yesterday we were sad to learn of the loss of Ernie McLean, the legendary guitar player who performed at Disneyland park for more than 30 years. Known for his warm smile and amazing jazz guitar, Ernie was an original member of the Royal Street Bachelors – now a guest favorite in New Orleans Square.

“Ernie was the last of his breed here at Disneyland,” remembered Stan Freese, Disneyland Resort talent booking director and friend of Ernie’s. “He was a blues and rock legend. He was a kind, classy gentleman who never spoke badly about anyone or anything. He loved his job, and we all loved him. His presence will be sorely missed.”

The best person to tell Ernie’s story is Ernie himself. Below is a recent interview with the man Disneyland guests would often see sitting on a wooden stool just outside Pirates of the Caribbean, playing jazz tunes on his guitar.

Did you have a musical family?
My father taught me how to play the guitar. I started playing at the age of 11, but don’t ask me what I was playing back then because I couldn’t tell you. My father had a job playing in a government concert band in New Orleans. They told him the banjo player needed to double on guitar. When he started to learn the guitar he taught me too.

Did you continue your musical training after high school?
After high school, my father said, “Look you’re not gonna be running around like you’re crazy, this is World War II.” So I joined the Navy. When I auditioned for their band, they put music in front of me to audition and I messed it up something terrible. Then they told me I did okay. They taught me everything I needed to know about music. I played for four-and-a-half years in the Navy.

What did you do after your military service?
After I got out of the service, I decided I wanted to continue playing music for a living. When I played with Dave Bartholomew things really took off. We recorded with Fats Domino, Nancy Wilson, Little Richard, Sonny and Cher, and even did Chrysler commercials.

How did you end up working at the Disneyland Resort?
I auditioned as a guitar player for a tour. I didn’t think I was going to get the job. Then they started to talk about rehearsals and going to the studio, so I stopped them and said, “You haven’t offered me the job,” and they replied, “Why do you think we are telling you this if you didn’t get the job?” Once the tour ended, [Walt] Disney eventually called me to sub for the banjo player at Disneyland. That is when I became permanent at Disneyland.

We will miss Ernie and the joy that his talent brought to millions of guests in one of the most unique locations in any Disney park.