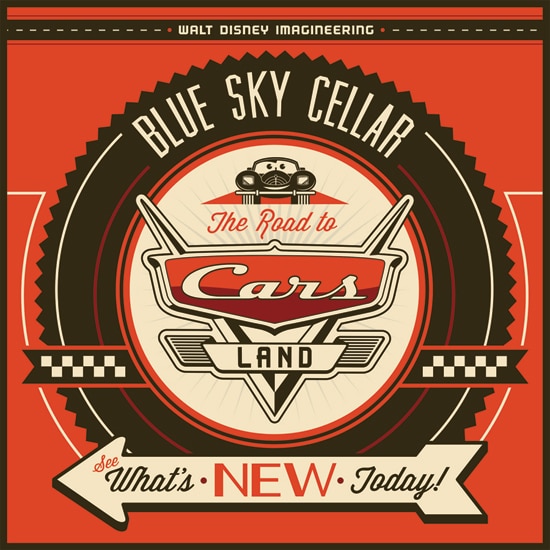 There’s a big update coming to Walt Disney Imagineering Blue Sky Cellar at Disney California Adventure park on Wednesday, Feb. 29. “The Road to Cars Land” will be a sneak preview of the plans for Cars Land, featuring a model of the land, maquettes of some of the new ride vehicles, and sketches and early concept art.

And of course, brand-new Cars Land attractions posters will be included in this latest update. Other items to be featured will include the shovel used during the ground-breaking ceremony in July 2009 with the signatures of John Lasseter, Director of “Cars” and Principal Creative Advisor, Walt Disney Imagineering, and other project team members. A new video at Walt Disney Imagineering Blue Sky Cellar will feature John, the Cars Land design team, project architects and landscapers providing insights into the innovations behind the new land opening this summer at Disney California Adventure park.

Once the expansion is complete, Walt Disney Imagineering Blue Sky Cellar will continue to be a preview center for new experiences planned for the Disneyland Resort.