With Valentine’s Day just around the corner, we thought it would be fun to talk about an animal species where the male and female share a special bond. The vast majority of animal species do not maintain monogamous relationships. Gibbons, including the white-cheeked gibbon, are one of the few species that do. Guests can see white-cheeked gibbons at Disney’s Animal Kingdom in Asia near the entrance to the Maharajah Jungle Trek. 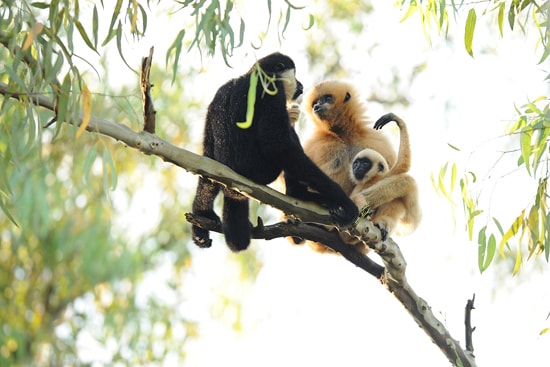 Gibbons live in small monogamous families, consisting of a mated pair with their offspring. They are one of the few apes where the adult female is the dominant animal in the group. Grooming and playing are important social activities for gibbons, and the couples sing together. Adult pairs sing to advertise the establishment of their territory or to warn off other family groups. The gibbons’ duets help to strengthen pair bonds, and pairs can be identified by their particular song. Single adults will sing to attract a mate.