I’m looking forward to celebrating St. Patrick’s Day. It’s not only the birthday of a good friend, but March 17 also falls on a Saturday this year – two perfect reasons to celebrate all day long. To get in the celebratory mood, I looked around Disney Theme Park Merchandise for some new St. Patrick’s Day items. One of the most noticeable items I saw was an ear hat designed by Disney Design Group Artist Tim Whalen. I asked Tim about the design for the hat.

“I used last year’s ear hat as a starting point for the design,” explained Tim. “The 2011 hat was popular with guests, so we made a few tweaks, including updating the font used on the hat. We also added an image of Mickey Mouse wearing a mini-bowler hat similar to the mini hat attached to the ear hat.” 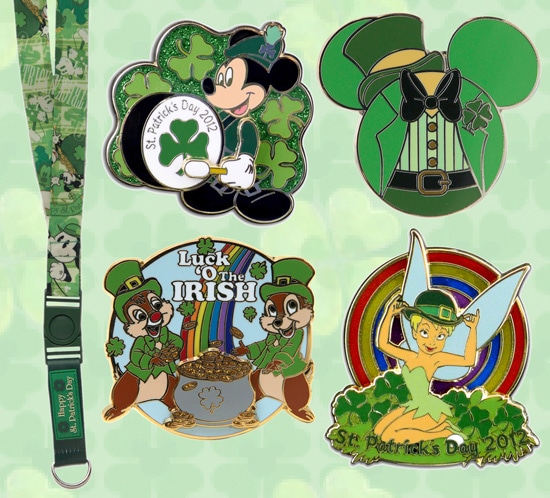 The Disney Pin Team released a few new pins and a decorative deluxe lanyard with sublimated printing. I think my favorite pins are the simplistic Mickey Mouse icon (simple designs are sometimes the best) and the Chip and Dale pin (I need all the luck I can get!).

We also re-introduced the 12-inch Duffy the Disney Bear who is dressed for the holiday. This will be the final year that this version of Duffy will be released. The Duffy team is considering a costume for the 17-inch bear next year.

Speaking of attire, new this year is a women’s graphic tee-shirt that features a Mickey Mouse icon comprised of approximately 800 tiny shamrocks and one giant shamrock. Disney Design Group artist Dave Keefer created the mosaic-like design, and he told me that tiny rhinestones were originally planned for several shamrocks. The final design, however, didn’t include them, but it has a treatment that makes the design shimmer in certain lights. 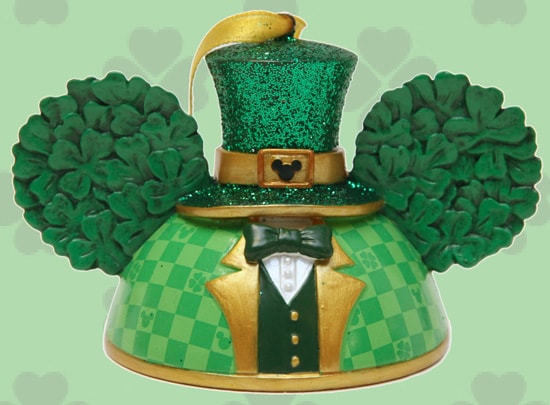 There is one item that won’t arrive until July, but it’s so cool that I couldn’t resist sharing. Last July, I discussed a new series of ear hat ornaments. I’m happy to report that another wave of those hats will include an assortment of holiday-themed hats. I was most impressed with the level of detail found on the sculpted ear hat pictured above.

I hope you have a festive and happy St. Patrick’s Day!