It’s hard to believe it was just over a year ago that we launched the Disney Dream. And yet here we are, marking another significant Disney Cruise Line milestone – the christening of the Disney Fantasy. 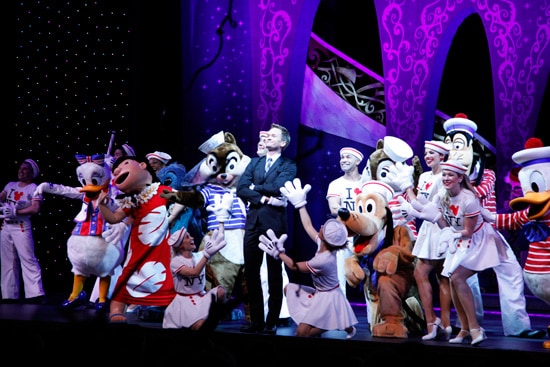 During a star-studded celebration in New York Harbor last night, Disney President and CEO Bob Iger and I were joined by the ship’s godmother, Mariah Carey, and of course, Mickey Mouse, to do the honors and officially welcome this stunning new ship into the Disney family. As if Mariah and Mickey weren’t enough star power, Jerry Seinfeld, Neil Patrick Harris and Nick Cannon were also on-hand to help us commemorate this momentous occasion.

Now that the ship has been christened, the Disney Fantasy and her phenomenal cast and crew will head south to the ship’s new home in Port Canaveral to prepare for the upcoming Maiden Voyage on March 31.

Building the Disney Fantasy truly was a labor of love. As with the Disney Dream, our Imagineers worked closely with the team at Meyer Werft Shipyard in Germany to construct this spectacular addition to our fleet, one that builds on the creativity, innovation and artistry that are hallmarks of the Disney Cruise Line. I’d like to again thank the thousands of Imagineers, designers, artists and craftspeople who worked so tirelessly for more than two years to bring the Disney Fantasy to life.

The Fantasy has some favorite elements from the Disney Dream, like the AquaDuck and our enchanted artwork. And since guests aboard the Fantasy will spend more time with us on longer, seven-night itineraries, our Imagineers mixed in some new magic, like our two new Broadway-style shows, “Disney’s Wishes” and “Disney’s Aladdin: A Musical Spectacular” and the AquaLab, a brand-new water play area for the entire family.

With the addition of the Disney Fantasy, our fleet of ships has doubled – giving us the ability to offer more destinations and flexibility to our guests around the world than ever before. But more importantly, it gives us the opportunity to do what we do best… connecting friends and families to the Disney stories, characters and music they love to help make memories that last a lifetime.