There’s a new crew in town at D Street in Downtown Disney District, and they’re causing quite a stir…because they are none other than The Mavericks of Mayhem! So when can you expect to see this line hit store shelves? July 2012! 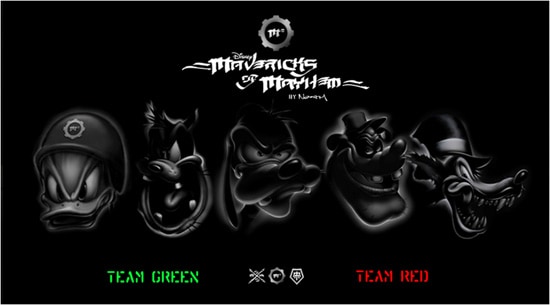 You can almost hear the engines roaring and tires screeching as Peg Leg Pete, Big Bad Wolf, Donald Duck, Goofy and Beagle Boy – who are just a few of the notorious risk-takers in this collection – take to the track to compete for titles and gain the most street credit. Our classic hero Donald Duck looks fierce as he races in a daring and boisterous way, while Goofy scrambles to rig his vehicle to outperform the others in the most zany and precarious manner. These two go head-to-head against Disney’s official bad boys, the Big Bad Wolf, Peg Leg Pete and Beagle Boy, in a rivalry like you’ve never seen before – complete with racing and old-school competitions.

Designed by Noah and presented by Disney Consumer Products, this edgy new lifestyle apparel line depicts this group of charismatic characters like never before. Whether racing for Hot Rod pink slips or riding custom choppers, these Mavericks of Mayhem herald the attitude and confidence to do whatever it takes to steal the limelight and compete for the title. It’s all about bragging rights and these rowdy teams will do whatever it takes.

When I asked Noah how he would best describe this new line of tees, fleece art and skate decks, he said, “That’s easy…I like to think that this collection is driven by the action-sports lifestyle for the moto, surf, skate and risk-taker. It’s an E–Ticket line. While designing, my creativity has been driven by guests of all ages and allowing them to see these amazing old-school Disney characters in a new light. So I added lots of black and high contrasts to these stylized character images in hopes of giving it a little bit more edge. To date these are some of my favorite designs. It’s certainly the closest to my heart, as I believe it’s what a lot of guys, like myself, have been looking for. So not only do I have the chance to show off some of my favorite characters, but I can wear them in a cool way that fits my lifestyle.”

So keep this on your radar and I’ll make sure to keep you updated as an official launch date draws near. Can’t get enough of Noah? Well then I’ve got good news for all of you fans out there, because he will be stopping by The Disney Gallery on April 14 to sign some of his recent releases, and word is he’ll even be doing an artist demo. Details on these events and more are on ArtofDisneyParks.com, so be sure to check it out.