Sights & Sounds at Disney Parks: Robert Sherman Made Our Lives a Jolly Holiday

Today, the wind has changed and Disney Legend Robert B. Sherman has had to leave us. But the immeasurable gifts of song he has given — in that magical partnership with his surviving brother, Disney Legend Richard M. Sherman — will stay forever. 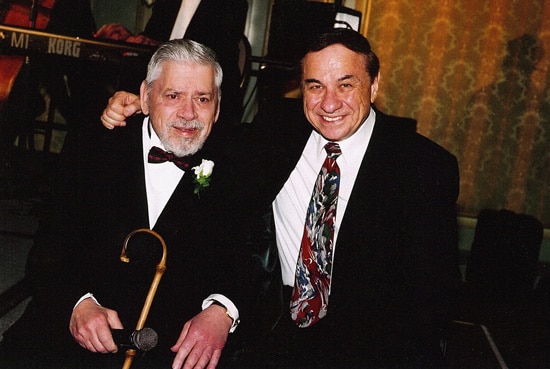 Walt Disney believed that the songs were the things that people could take with them, long after they left the theater. No songs attach themselves to our synapses more than the Sherman tunes. We kid around sometimes about how some songs, like “it’s a small world” and “The Tiki Tiki Tiki Tiki Tiki Room” are almost impossible to get out of one’s head, but there are far worse things to get stuck there (at least in my head, anyway)!

There are also Sherman songs that reach deep into the far reaches of our hearts and souls, like “Feed the Birds,” “Hushabye Mountain” and Robert’s personal favorite, “On the Front Porch.” Deceptively simple, yet immensely effective and affecting. As it is shown in the not-to-be-missed film, The Boys, Robert and Richard — though they had issues (just like any family members) — could capture lightning in a bottle in the form of miracles from musical molecules.

Next year will be the 50th anniversary of the song that ignited the Shermans’ Disney career: “Tall Paul.” Half a century of musical milestones and memories. As a fond nod to Robert, his brother Richard and beloved family, I’m going to pop in a DVD with a Sherman score, listen to one of their albums (I love “The Sherman Brothers Songbook”), relive a Disney Parks attraction featuring their music — and simply hum or sing. Walt was right, of course. Great songs are precious gems that you can carry around and enjoy anytime you wish.