It was just a couple of months ago that Precious Moments doll maker Linda Rick was spotted at World of Disney Store in the Downtown Disney District at the Disneyland Resort. It was there that she debuted a new collection of dolls celebrating Cinderella, who appeared in a variety of fashions – as she transitioned from her humble beginnings, to her dramatic ball gown with the help of her fairy godmother, to a dream-come-true bridal gown for her own magical wedding to none other than Prince Charming.

So what else does Linda have up her sleeve to dazzle us with? What if I told you that this collection is considered simply ‘darling,’ that it’s no flash in the ‘pan’ or that you’ll be ‘hooked’ the minute you see it? Or what if I told you that it sparkles with pixie dust? If Peter Pan was among your guesses, then you’re right! Here’s a look at the new collection set to debut in just a few short weeks. 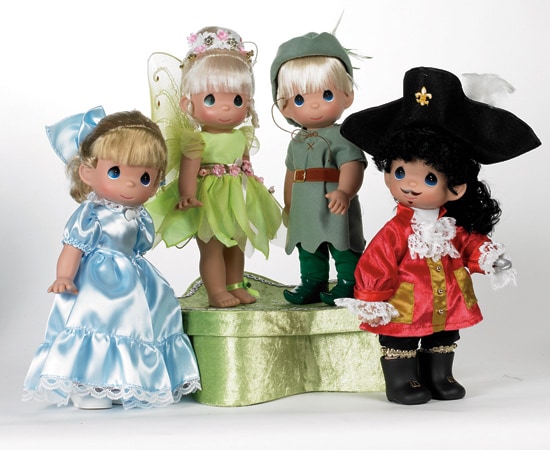 Linda is currently scheduled to appear at the Disneyana Shop in Disneyland park, April 6 – 8. For those of you hoping to catch up with Linda when she is at Heritage Manor in Epcot at the Walt Disney World Resort, I have good news for you. You’ll have two chances to see her: Mar. 31 – Apr. 1 and again Apr. 13 – 15. Be sure to visit ArtofDisneyParks.com for details on appearance times, locations and, of course, to see some of the other dolls available in the Disney Precious Moments Doll Collection!