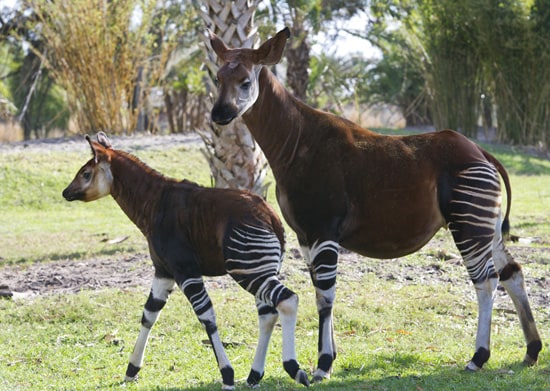 Last November, we were proud to announce on Disney Parks Blog the arrival of our female okapi calf, which was born October 1 at Disney’s Animal Kingdom Lodge.

Now, the resort’s animal care team reports that the baby has begun venturing out with her mom on the Pembe savanna, which is adjacent to the Kidani Village section of the resort. Gene Duncan captured these photos of the pair roaming the savanna earlier this month. Mom and baby are spending part of the day on the savanna on most days. The team says that the calf is growing like a weed and now weighs 187 pounds!

It’s unusual to see an okapi in a mixed-species savanna habitat, and guests are enjoying this special opportunity to observe, and snap photos of mom, Zoe, and her 5-month-old calf, whom the team named “Makemba” (an African name that means “goddess”). The Disney’s Animal Kingdom Lodge animal care team and savanna guides are having a great time sharing okapi fun facts with the resort guests: Did you know that the okapi, despite its stripes, is a relative of the giraffe and not the zebra?