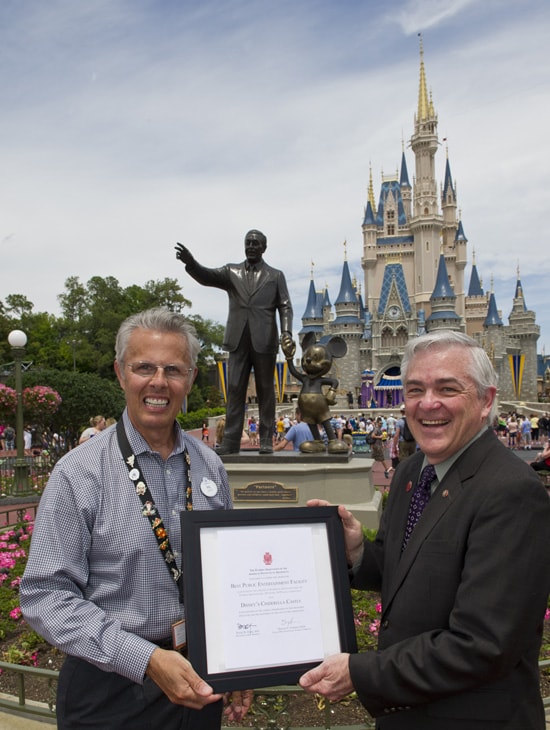 This month, the Walt Disney World Resort landmark icon was named one of the Top 100 Buildings in Florida by The Florida Association of the American Institute of Architects (AIA Florida) as a part of their “Florida Architecture: 100 Years. 100 Places.” celebration for the organization’s 100-year anniversary. Cinderella Castle was also named Top Building in the Recreational Architecture category.

AIA Florida is an association of architects with a mission to unite, educate and position architects to lead the shaping of Florida’s future. The members of AIA Florida are leaders in their communities and passionate about good design; the health, safety and welfare of others; and preserving architecture through sustainable practice.

AIA Florida Immediate Past President and former Imagineer Michael Lingerfelt, FAIA, LEED AP, presented the award to Magic Kingdom Park Vice President Phil Holmes on Wednesday, April 18. It was a homecoming of sorts for Lingerfelt, whose 15-year tenure with WDI included working on Magic Kingdom Park projects such as New Tomorrowland, The Many Adventures of Winnie the Pooh and Mickey’s PhilharMagic.

In March, AIA Florida launched the Top 100 Buildings statewide online competition, inviting the public to vote for their favorite Florida building. More than two and a half million votes were cast, both by architects in the association and the general public. This year marks the 100th anniversary of AIA Florida, recognizing the important contributions architects have made in the Sunshine State. The awards are just one of the events the association has planned throughout the year to celebrate its anniversary, which is Dec. 14.