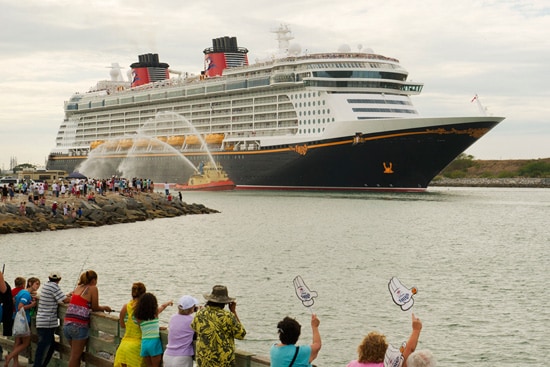 Members of the community gathered together at Jetty Park in Port Canaveral, Florida, on Saturday to wish the Disney Fantasy “Bon Voyage.” There was excitement in the air that erupted into cheers when the Disney Fantasy played “When You Wish Upon a Star” on its horn and began its way down the channel for its Maiden Voyage to the Western Caribbean.

Our new ship sailed by approximately 4,500 spectators, who were waving Mickey hands along the shoreline and at nearby restaurants, on its way out to sea. Disney Fantasy guests and beloved Disney characters onboard waved back.

Port Canaveral also hosted a similar event to welcome the Disney Dream last year, and many local families were able to attend both events and wave to both ships. Radio Disney and WLRQ FM 99.3 played music and hosted trivia contests.

We were even treated to a visit from Disney fan favorite Bonnie Voyage, who entertained the audience.

Nothing could dampen the spirits of our fans who were there to help us celebrate the newest addition to our fleet, not even a little rain.