As previously mentioned in this post, Star Wars Weekends – one of the most popular month-long events at Walt Disney World Resort – returns to the Disney’s Hollywood Studios galaxy in May and June this year.

Today, we’d like to announce two of the talented Star Wars stars that will serve in Celebrity Host roles this year. They are both Star Wars Weekends veterans, so we’re especially excited to welcome them back again. 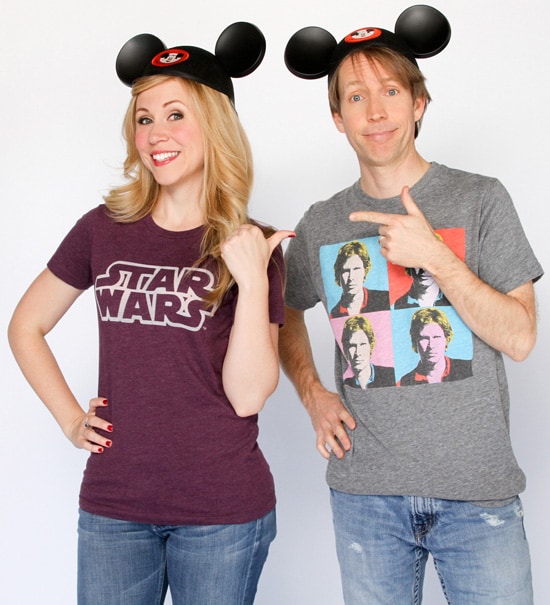 Ashley Eckstein and James Arnold Taylor – who provide the voices of Ahsoka Tano and Obi-Wan Kenobi, respectively, for the popular animated series, Star Wars: The Clone Wars – will join us for the duration of the 2012 event in their host roles.

One of the most versatile voice actors today, James not only is famous for the voice of Obi-Wan Kenobi, but many other popular characters from films, television, advertising and video games. He’s the current voice of everyone’s favorite resident of Bedrock, Fred Flintstone, and has a list of character voice credits including Green Arrow, Johnny Test and Ratchet (from the “Ratchet & Clank” video game series), just to name a few.

Ashley, who provides the voice of Ahsoka Tano, Anakin Skywalker’s eager Padawan learner, is no stranger to Walt Disney World Resort and Disney’s Hollywood Studios. She practically grew up (literally) in the middle of the magic. Her father was a longtime Disney Parks cast member and her first plunge in show business was as a parade dancer at Disney’s Hollywood Studios. It’s full circle for Ashley; little did she know that the street (Hollywood Blvd.) where she performed in daily parades would someday be the same street where she’d be center stage as one of the featured celebrities in Star Wars Weekends motorcades. In the time since Star Wars: The Clone Wars debuted, Ashley also has become a fashion designer and head of her own company, “Her Universe,” that specializes in merchandise and apparel specifically for female sci-fi fans. Look for some of her latest Star Wars-inspired designs this year during Star Wars Weekends.

We’re excited to once again welcome James and Ashley, who entertained Star Wars Weekends audiences last year in their Celebrity Hosts roles, back for another year of galactic fun. We hope you’ll join us!

Stay tuned to the Disney Parks Blog for future updates about the event, special activities and the rest of the Star Wars celebrities that will make appearances each weekend.