There’s no denying that the Force is getting stronger by the day. I’m sure many of you are counting down the days until Star Wars Weekends kicks off at Disney’s Hollywood Studios at the Walt Disney World Resort. I’m a little jealous of those of you who get to go. My fellow Disney Parks Blog author, Gary Buchanan, always has so many great posts about the special appearances and events, so who wouldn’t want to be there? I have to admit … when I was little, I dressed up as Princess Leia for Halloween – white robe gown, cinnamon-style buns on the sides of my head and all (and no, you can’t see a picture). Before you fall out of your chair laughing at that visual, think back – because I bet many of you did the same thing. I’m pretty sure there were a lot of Princess Leias, Han Solos, Luke Skywalkers and Darth Vaders roaming around neighborhoods. (And with the continued popularity of the saga, there still are!)

So why the walk down memory lane? Because ACME Archives has just released a new collection of Star Wars-themed art which I know you are going to go crazy over. There’s an array of Star Wars characters posed in what could be considered “surrealism”-style paintings and even vacation destination-looking posters. I can’t keep you waiting any longer, so here’s your first look at some of these new pieces. 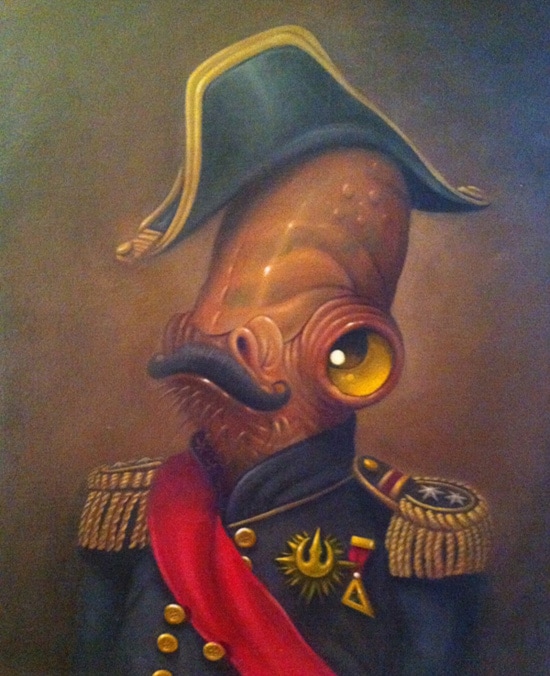 So, don’t let me be your only hope – make the jump to hyperspace and head for D Street in the Downtown Disney District at the Disneyland Resort on May 5. Artist William Silvers and Creative Director Chris Jackson will be on hand from 3-6 p.m., and I can pretty much guarantee you won’t want to miss it. To check out other pieces in this collection, visit ArtofDisneyParks.com.