Disney Parks are Alive with the Sound of Music!

Fans of the classic film “The Sound of Music” – and let’s face it, who isn’t a fan – will find a special treat around Walt Disney World Resort this weekend. Fred Bronson, author of The Sound of Music Family Scrapbook, will be meeting fans and signing his new book at Disney’s Hollywood Studios and Downtown Disney Marketplace today and Saturday. 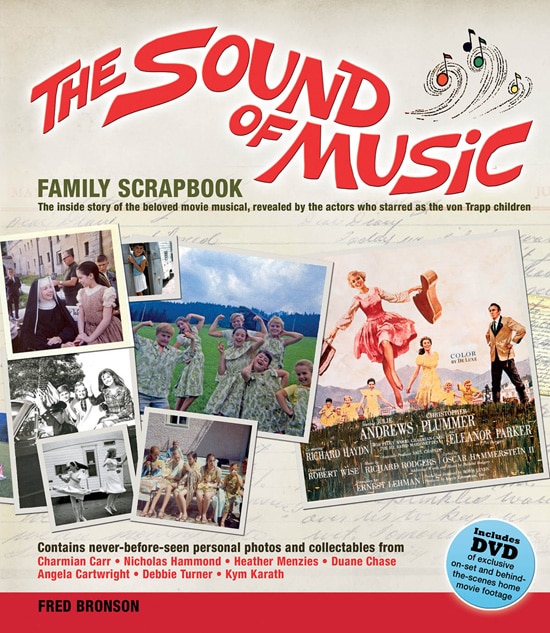 The book is an in-depth look at one of the most beloved films in cinematic history through the eyes of the cast, including Charmian Carr, Nicholas Hammond, Heather Menzies, Duane Chase, Angela Cartwright, Debbie Turner, and Kym Karath – the actors who starred as the von Trapp children. It covers the making of the film, as well as stories of the lives (before and since) of these seven adults, who are still referred to as “the kids.”

Through anecdotes, photographs, and replicas of memorabilia, The Sound of Music Family Scrapbook answers the burning questions fans have been asking for years: How did the children learn the songs and dances for the musical numbers? What was it like to attend a gala Hollywood premiere? How did their lives change after starring in such a beloved film? Pockets within the book include a DVD of their home-movie footage and replicas of Heather’s autograph book, Angela’s artwork, and Kym’s letters home to her father, the official movie poster, and much, much more.

A television writer and author, Bronson has many TV writing credits, including episodes of Star Trek: The Next Generation and the American Music Awards. He’s also written books, including Dick Clark’s American Bandstand (with Dick Clark) and The Billboard Book of Number One Hits.

Bronson will be signing copies of The Sound of Music Family Scrapbook on Friday, April 6, at The Writer’s Stop at Disney’s Hollywood Studios from Noon – 2 p.m. and on Saturday, April 7, at The Art of Disney at Downtown Disney Marketplace from 5 – 7 p.m.

Likes (0)
Share Disney Parks are Alive with the Sound of Music!