Following the post earlier in the week about the return of James Arnold Taylor (voice of Obi-Wan Kenobi – Star Wars: The Clone Wars) and Ashley Eckstein (voice of Ahsoka Tano – Star Wars: The Clone Wars) as Celebrity Hosts for Star Wars Weekends, we received a new transmission from an R2 unit that reveals more Star Wars celebrities scheduled to appear this year at Disney’s Hollywood Studios park. The annual event takes place each Friday, Saturday and Sunday from May 18-June 10, 2012.

With Donald Duck doing his best Darth Maul impression in the 2012 event logo, seen here, Star Wars Weekends 2012 will welcome several celebrities from Star Wars: Episode I The Phantom Menace for the Force-filled fun. In fact, Donald will have the chance to meet Ray Park, the action star who portrayed Darth Maul, during an extended engagement. Ray (pictured below) is scheduled to appear in both Weekends I and II. 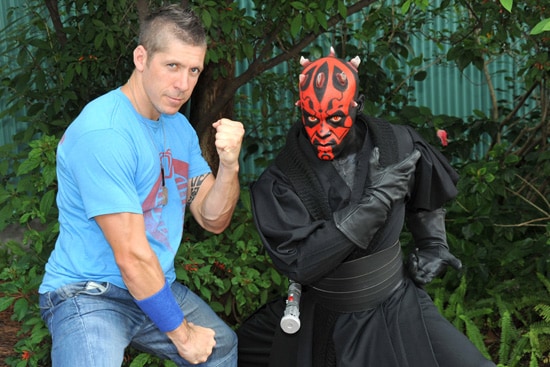 Another 2012 highlight: keep a sharp eye during Weekend IV when bounty hunters — a favorite among many fans — take center stage in their very own weekend (doesn’t that seem appropriate, considering Star Wars bounty hunters generally work on their own anyway?). As an added surprise, Weekend IV will be a “Bonus Boba” weekend! Both actors who portrayed laconic enforcer Boba Fett in the saga — Jeremy Bulloch and Daniel Logan — will appear during the event’s closing weekend.

While most daily events are still being scheduled, we have received a few additional news of note and tips for Star Wars Weekends 2012 (all activities & entertainment subject to change):

That’s the latest for now. Keep checking back as we confirm more scheduled activities for Star Wars Weekends 2012. Do you have any special memories of past Star Wars Weekends or of any of the celebrities that will attend this year? If so, please share in the comments.