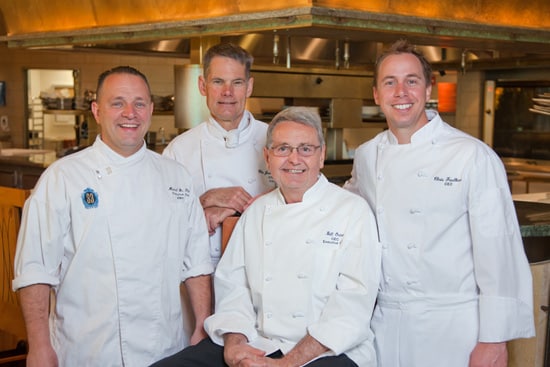 The ACF is the nation’s largest organization of professional chefs and has been considered the authority on cooking in America since 1929.

Faulkner is the chef at Storytellers Cafe at Disney’s Grand Californian Hotel & Spa, and graduated from the California Culinary Academy in San Francisco. His biggest inspiration in the kitchen? “Discovering new ingredients,” says Faulkner.

St. Pierre is chef at Club 33 in Disneyland park, and graduated from the Culinary Institute of America in Hyde Park, N.Y. “I am a true believer that hard work pays off, “ says St. Pierre. “I wanted to give back to the culinary industry while hopefully being an inspiration to my team.”

Justesen is area chef at the Disneyland Resort and also graduated from the Culinary Institute of America in Hyde Park. His biggest culinary inspiration? “My two grandmothers,” says Justesen.

Orton heads Disney’s Culinary Academy and graduated at the top of his class from the French Culinary Institute in New York. Originally certified in February 2007, Orton is an advocate of continuing education, and says that his students are his biggest inspiration. “They get so excited about cooking, and their excitement is contagious,” says Orton.

Check out these posts for more news about dining at Disneyland Resort: