“Fantasmic!”, the incredible nighttime spectacular at Disneyland park, marks its 20th anniversary this weekend. I’ll never forget the first time I saw the show. What had been a tranquil scene during the day was magically transformed at night by the power of Mickey’s imagination, and when the Sailing Ship Columbia fired its cannon and suddenly appeared as Captain Hook’s galleon during the show, it gave me goose bumps. It still does!

I recently had the opportunity to speak with Barnette Ricci, Vice President/Show Director of Special Events for the Walt Disney Studios, who 20 years ago was senior show director for Disneyland park. She shared some of her memories of creating Fantasmic! 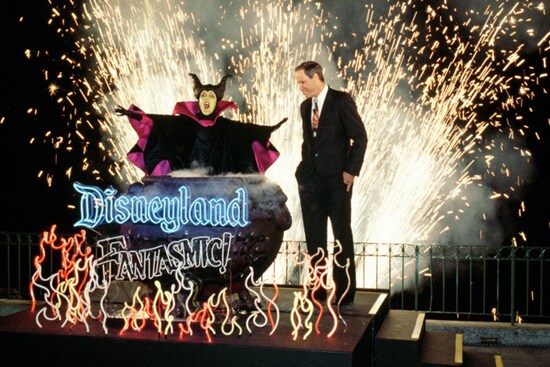 We had no new attraction opening that summer of 1992, so I was asked to create a show that could be marketed as something really special. I always felt that the [Rivers of America] was a truly unique venue, but I wanted to use it in a new way to create something different for our guests.

We researched all kinds of water-related special effects, and we discovered these water screens in France. We found that projecting animation footage on the water looked absolutely spectacular! By layering the dancing water fountains, special lighting, lasers, pyrotechnics and black light, along with live performers on watercraft and this new way to project animation on water, I was convinced all of these elements combined would create a rather exciting show!

It took months of searching through Disney film footage to find the right clips for the storyline and to create the film elements so they would look great on the water. We spent three months of ‘all-nighters’ out there on the river, programming all the effects and meticulously finessing the timing based on the time code of the film. Every burst of water, pyrotechnic, laser and live element had to be exactly timed and rehearsed to be in sync with what happened on the screen and with the fantastic musical score.

The show was originally called ‘Imagination’, as the title song implies, but everyone felt it needed a stronger title, so finally – and fortunately – it was renamed ‘Fantasmic!’

The first time we performed the show for a real audience, I was thrilled watching and hearing their reaction to the show. Words cannot express how proud I am of ‘Fantasmic!’ and how proud and thankful I am of everyone who worked so hard to bring it to life, and who continue to keep it going strong, night after night.