Disney California Adventure Park Will Have Plenty of Character This Summer

When it’s officially reopened on June 15, Disney California Adventure park will feature even more Disney than ever before, with our famous cast of characters making special appearances in delightful new entertainment offerings. 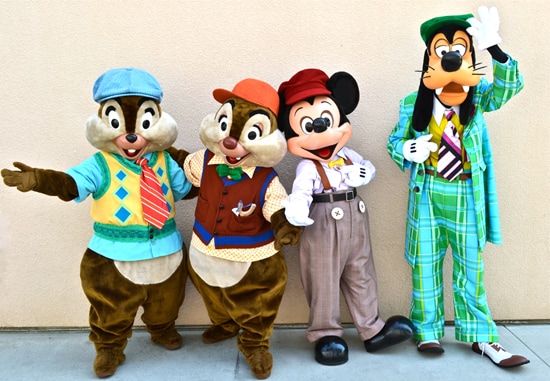 Down on Buena Vista Street, it’s the 1920s and 1930s, and you may run into those young upstarts, Chip ‘n’ Dale, who are looking pretty snazzy in spiffy period outfits. Goofy’s got a plaid suit that’s the “cat’s pajamas,” while a new fella named Mickey Mouse has just arrived in town, hoping to make his dreams come true just like his pal, Walt Disney. He might even join the Red Car Trolley News Boys for a song and get discovered in the process.

In Hollywood Land, you can kick it Disney-style as “Dancin’ with Disney” takes over Stage 17, inviting you to join some of your favorite characters in a fun-filled, interactive party. From 1 p.m. – 5 p.m. each day this summer, you can step inside for music videos, trivia and surprise character appearances. You never know who might show up!

Over at Paradise Park, the inimitable Goofy becomes maestro extraordinaire, as he dons his topcoat and tails to lead an invisible orchestra during several daily mini-concerts. As he conducts, the fountains of Paradise Bay begin to “dance” to the music, providing dramatic – and often comic – interpretations of the compositions. Of course, on a visit to the all-new Cars Land, you may just cross paths with two of Radiator Springs’ most famous residents, Lightning McQueen and Mater. Throughout the day, these best pals will be driving through town to the Cozy Cone Motel to make a few new friends.

With all this, plus the return of the Pixar Play Parade and continuing favorites like “Phineas & Ferb’s Rockin’ Rollin’ Dance Party,” “Minnie’s Fly Girls Charter Airline” and Wilderness Explorers Dug and Russell at Redwood Creek Challenge Trail, Disney California Adventure park is shaping up to be a Disney character fan’s paradise!

Keep an eye on the Disney Parks Blog and follow @Disneyland on Twitter for the latest on the expansion of Disney California Adventure park. While you’re on Twitter, join in the conversation by using the hashtags #CarsLand, #BuenaVistaStreet, #MadTParty and #JustGotHappier.

Destinations: Disney California Adventure Park Will Have Plenty of Character This Summer