For a few months now, my fellow blog author and Imagineer Kathy Mangum has been keeping you updated on the progress of Cars Land at Disney California Adventure park. 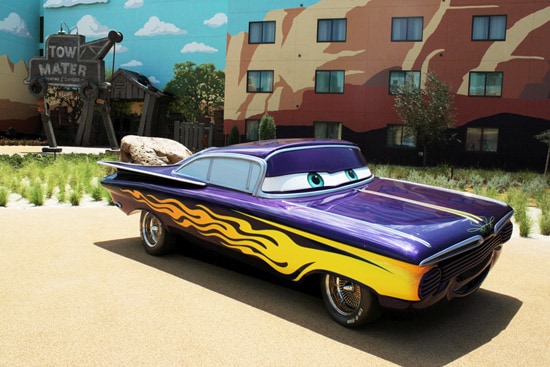 I’m happy to finally have some “Cars” fun to share over here at Walt Disney World, with the first look inside the “Cars” wing of Disney’s Art of Animation Resort. This second phase of the resort is set to open June 18 (the first phase, a “Finding Nemo”-themed wing, will open May 31).

The “Cars” wing is themed after Radiator Springs, and features nods to places in the film, such as Tow Mater Towing & Salvage. It also sports 11 life-sized characters from the film, including Sheriff, Doc, Sally, Sarge, Lightning McQueen, Flo, Mater, Fillmore, Luigi, Guido, and Ramone (seen above), the latter of which our Imagineers created with automotive design superstar Chip Foose.

Here’s a look back at a previous behind-the-scenes look we shared here on how Ramone was designed:

Read these posts to learn more about Disney’s Art of Animation Resort: