Galactic Food Fun at Star Wars Weekends: This is the Droid You’ve Been Looking For!

There are some tasty treats at Star Wars Weekends 2012 at Disney’s Hollywood Studios, with R2-D2 being “the droid you are looking for” each weekend. 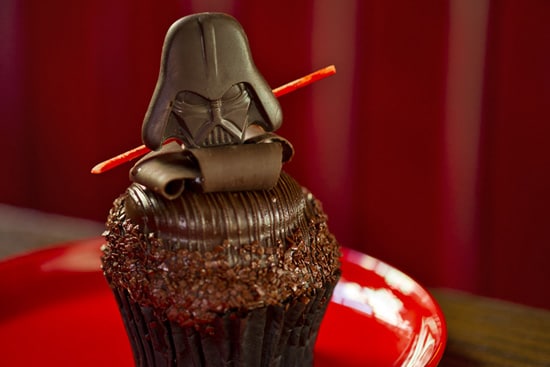 Darth Vader is featured on a special cupcake, which goes to the “dark side.” This chocolate confection is $4.99 and is available at Darth’s Mall (the special merchandise location set up just for Star Wars Weekends 2012), ABC Commissary, Backlot Express, Studio Catering Co., Pizza Planet and Starring Rolls Cafe. Known for carrying secret plans in Star Wars: Episode IV A New Hope, R2-D2 carries some yummy treats for Star Wars Weekends. The loveable droid is featured with his own bucket that holds churros with chocolate dipping sauce available at the Herbie’s Cart, Fantasmic! and the churro cart in front of The Great Movie Ride.

In the mood for something savory? Try a corn dog and chips served in an R2-D2 Bucket from Herbie’s Cart, or treat your little Padawan or Jedi to an R2-D2 Kids’ Power Pack from Pizza Planet, Backlot Express, Studio Catering Co, ABC Commissary, Catalina Eddie’s, Fairfax Fare or Rosie’s All-American Café.

R2-D2 also can be spotted holding frozen lemonade in a special souvenir cup from Anaheim Produce, filled with a tasty shake at Min & Bill’s Dockside Diner and 50’s Prime Time Café, or stuffed with a hot fudge sundae at Sci-Fi Dine-In Theater Restaurant.

Check out these posts for more of the latest on Star Wars Weekends 2012:

Likes (0)
Share Galactic Food Fun at Star Wars Weekends: This is the Droid You’ve Been Looking For!