It’s time again for another “Name That Costume” challenge! If you spotted me at the Disneyland Resort in this costume, where do you think I would be? 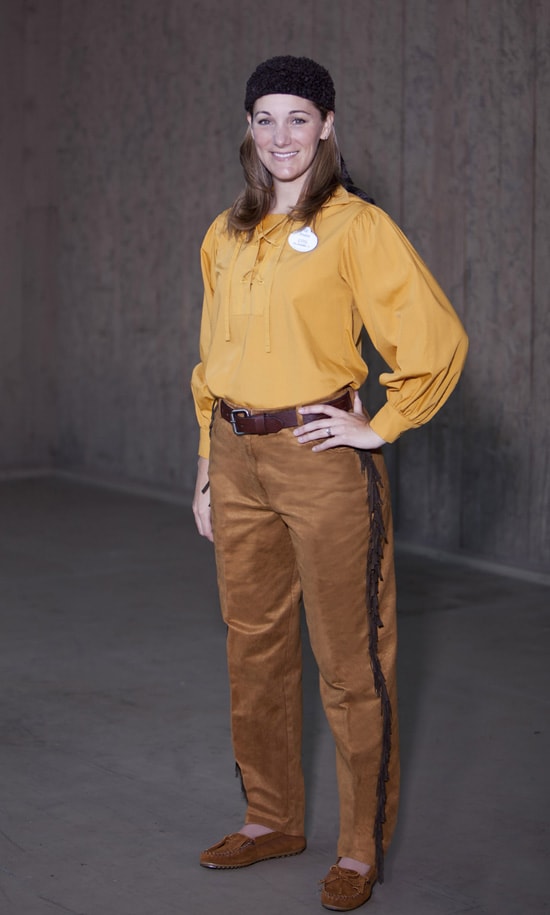 Go ahead – name that costume! Leave your guesses in the comments and I’ll be back later with the answer.

UPDATE: If you guessed that I’d be traveling along the Rivers of America aboard Davy Crockett’s Explorer Canoes, you’re right!

Davy Crockett was an American frontiersman, soldier, legislator and folk hero. Skilled at trapping bear and raccoon, he became famous for his signature coon-skin hat. In 1948, Walt Disney told columnist Hedda Hopper that it was “time to get acquainted, or renew acquaintance with, the robust, cheerful, energetic and representative folk heroes.” Disney wanted to highlight these historical figures, so he developed three one-hour episodes about Crockett for ABC – “Davy Crockett, Indian Fighter,” “Davy Crockett Goes to Congress” and “Davy Crockett at the Alamo” – all starring Fess Parker as Crockett.

The costume for Davy Crockett’s Explorer Canoes showcases the fringe look that was reflected in the early Davy Crockett movies – after all, he was the “King of the Wild Frontier.” Let’s start with the coon-skin caps: traditional Native American headgear that became associated with American frontiersmen of the 18th and 19th centuries. Disneyland park cast members always wear their caps (which are made to look like the “real thing”) with the “tail” in the back – just as was done in the days of the early frontier.