At Walt Disney World Resort and Disneyland Resort, “it’s a small world” is not just an attraction, saying or a song. It’s like a thread woven through our theme park tapestry. The most magical moments of my career occur when those four words leave the fantasy of the parks and turn into real-life experiences. 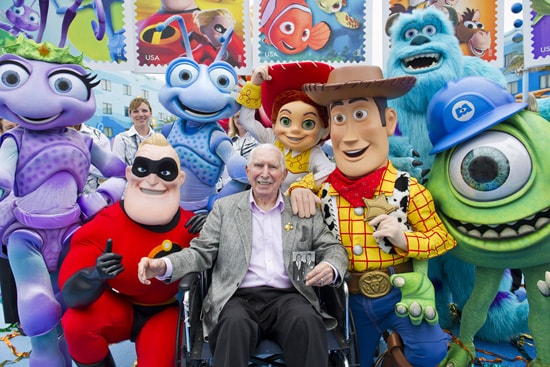 Last Friday, one of those surprise moments happened at Disney’s Art of Animation Resort. As you read here, our friends at Disney’s Art of Animation Resort helped premiere a series of stamps featuring Disney•Pixar characters. I noticed a gentleman in the audience wearing a golden Mickey Mouse lapel pin. When the ceremony ended, I introduced myself. I learned he was Al Konetzni, a Disney Legend. Born May 19, 1915, Al made his mark in Disney character merchandise.

As his official Disney Legend biography outlines here, one of Al’s most famous creations was a bright, lemon-yellow lunch box that featured Disney characters on a school bus. It’s been called one of the most popular lunch boxes ever sold. 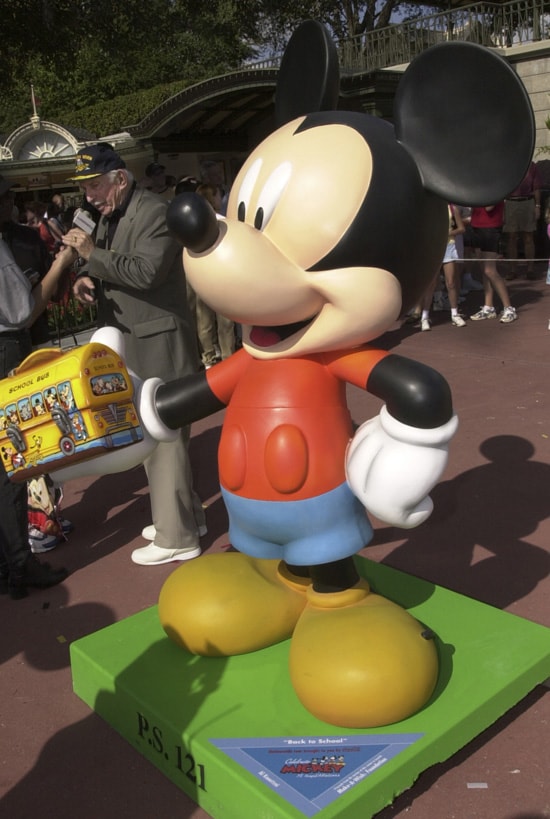 Now for the “small world” moment. In 2003, Al designed one of the Mickey Mouse “InspEARations” — larger-than-life statues created to celebrate Mickey’s 75th birthday. This week, I found a picture taken Nov. 18, 2003 at the Magic Kingdom. Al’s statue featured Mickey holding the famed lunch box. (You can spot Al standing behind the statue in the picture.) I remember asking Al what he loved about Disney. He answered, “Mickey always makes me smile.”

So last week, when I asked Al if he would pose with the Disney•Pixar characters at the stamp ceremony, I recalled that conversation from 2003. Then, Al asked if I wanted to see something. He pulled from his jacket pocket a black-and-white photo. It showed a smiling Al, posing with Walt Disney.

As you can see, Al’s still smiling — all thanks to Walt, Mickey, a bright yellow lunch box and now some new friends from the Disney•Pixar films.

This new photo is a snapshot of the past, present and future of Disney. Thankfully, Al represents all three. He made magic for many years, and he still inspires cast members like me and others who meet him. To this day, he still has that Disney smile and the love of our company that makes me so very proud of where Disney has been, where we are, and where we are going.