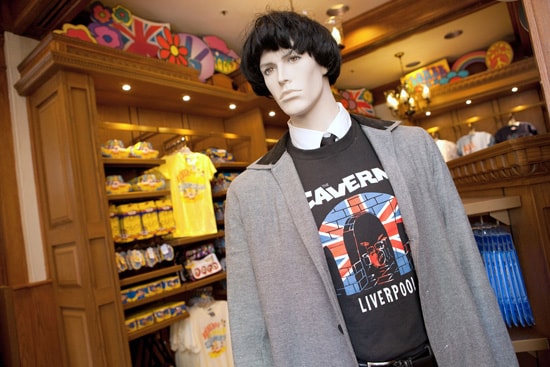 Music has played an important role throughout most of my life. I was a deejay for many years and I used to play the saxophone (fortunately for many, I didn’t do both activities simultaneously). I have an extensive music collection, including many vinyl albums. When my fellow author Jennifer told me that the Disney Parks Blog was saluting The Beatles, I jumped at the opportunity to write something. I own several Beatles albums and, recently, I’ve enjoyed singing two of my favorite songs during karaoke night – “All You Need is Love” and “Eight Days A Week.” There is a connection to The Beatles at Disney Theme Park Merchandise, and it is found at the Toy Soldier shop in the United Kingdom Pavilion at Epcot. The back of this merchandise location contains a Kidcot Fun Stop and is the perfect (or is that “thotful?”) spot to meet Winnie the Pooh and friends. The front half is dedicated to merchandise, including music-related items, storybooks and a few Duffy the Disney Bear options. I spoke with Sylvie Brumbaugh, Product Developer for World Showcase, about the location.

“We have a variety of items that salute British bands, including The Beatles,” explained Sylvie. “For World Showcase, we like offering merchandise that represents things or icons from a particular country. The Beatles are known the world over for great music, so it made sense for us to carry their merchandise.”

Yet, there is another reason why Toy Soldier was selected as a “rockin’” good merchandise destination – the British Revolution band plays nearby. Luckily, their music provided a great soundtrack while I photographed a few of my favorite Beatles items. The items pictured above were not developed by Disney Theme Park Merchandise, yet that doesn’t make them any less cool. I “love” the graphics on the duffle bag and matching mini-bags. The lunch boxes reminded me of my metal childhood lunchboxes (I’m jealous that my son occasionally uses a metal Mission: SPACE lunchbox at his school). Finally, I need the yellow submarine ice cube tray for my next party! 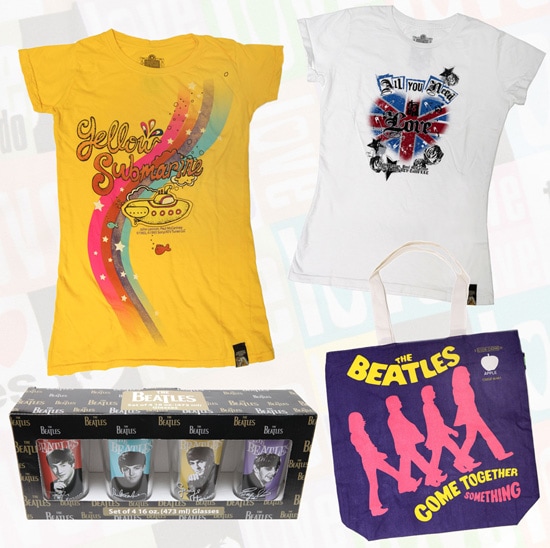 Sylvie said that World Showcase merchandise changes often, so she gave me a sneak preview of new Beatles things arriving this fall.

Check out more news from Epcot in the posts below: