Last month, I announced the release of a special Duffy The Disney Bear T-shirt for Mother’s Day. This month, we are releasing a shirt to celebrate Father’s Day. The shirt was designed by Disney Design Group artist Monty Maldovan and, considering I enjoy wearing ties, I love it! The shirt will be released on June 7 at Disney Traders at Epcot and World of Disney in Downtown Disney Marketplace. As with the Mother’s Day shirt, there are limited quantities of the shirt being added to existing 17-inch bears. Retail for this item will be $30.00 (plus tax). Duffy will also receive a few new costumes toward the end of 2012. Here is a first look at two new outfits for the 17-inch bear, including Peter Pan and the Mad Hatter. I spoke with Monty about his inspiration for these costume designs.

“For the costumes, I wanted to capture what guests see when visiting Disney Parks,” explained Monty. “The Peter Pan costume has bright colors and is very playful, similar to the character of Peter Pan. The Mad Hatter costume is a mixture of the outfit seen in the animated film and the in-park costume.” 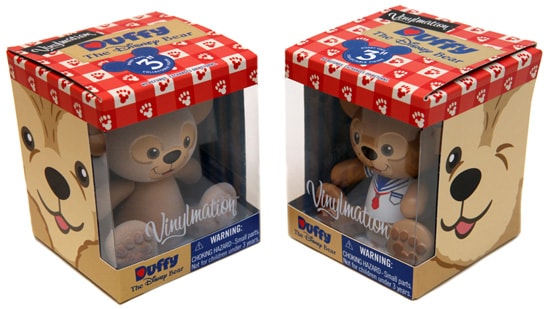 To celebrate the release of these figures, Monty will be making a special appearance at Treasures in Paradise in Disney California Adventure park on June 29 from 1:00 p.m. to 3:00 p.m. If you go, I’d love to see your photos, which you can post on the official Facebook page for Duffy.

For more updates on Disney Parks merchandise, check out the posts below: