Earlier this week, we learned of the passing of science fiction author Ray Bradbury, who made huge contributions to the field of science fiction writing with his celebrated novels Fahrenheit 451, The Martian Chronicles and Something Wicked This Way Comes. 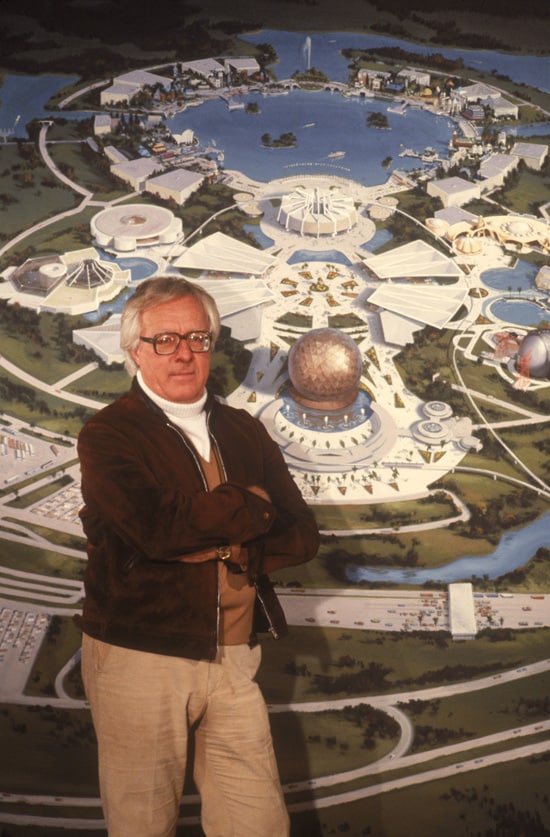 Bradbury, who met and became friends with Walt Disney in the 1960s, shared a lot in common with Disney, including a strong interest in progress and in the future. Both men also made contributions to the 1964 World’s Fair in New York, with Bradbury writing an 18-minute script recounting the history of America for the U.S. pavilion., and Disney creating “it’s a small world,” “Great Moments With Mr. Lincoln,” Ford’s Magic Skyway, and Progressland attractions.

Years later, when The Walt Disney Company pulled together plans to build Epcot, Bradbury was hired to help develop the storyline and script for an attraction that focused on the history of communication. This attraction later became Spaceship Earth.

In a 1982 interview with OMNI magazine, Bradbury shared his opinion on the park, which he felt set a model of hope for the future:

“Everyone in the world will come to these gates. Why? Because they want to look at the world of the future. They want to see how to make better human beings. That’s what the whole thing is about. The cynics are already here and they’re terrifying one another. What Disney is doing is showing the world that there are alternative ways to do things that can make us all happy. If we can borrow some of the concepts of Disneyland and Disney World and Epcot, then indeed the world can be a better place.”

Upon hearing of Bradbury’s passing, retired Walt Disney Imagineering executive Marty Sklar shared some of his thoughts on the company’s creative partnership with the author.

“Memories of this great storyteller and his love of Disney — and especially Walt and John Hench — fill my heart and mind today,” Sklar said. “Ray loved to tell the anecdote of when he urged Walt to run for mayor of Los Angeles. Walt’s response: ‘Ray, why would I run for mayor when I’m already king of Disneyland?’ Later, Ray did a story treatment that became the framework for the communication theme of Spaceship Earth at Epcot — and the first draft of his ‘summary’ ran 14 pages! Of course, he was the storyteller; it was our job to turn his prose and metaphors into a ride experience. I will always treasure Ray’s philosophy of what he called optimal behaviorism: ‘Make sure when you wake up in the morning that you know you accomplished everything you possibly could the previous day. And then do it again!’