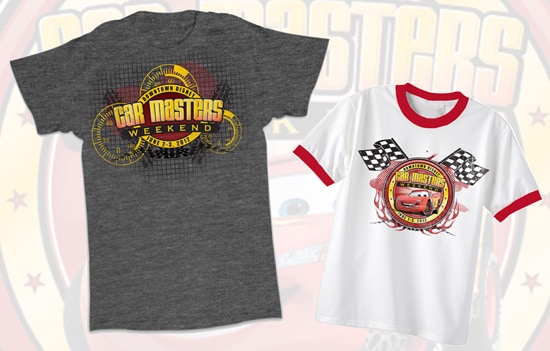 Like my fellow Disney Parks Blog author, Jennifer Fickley-Baker, I’m looking forward to the return of Downtown Disney Car Masters Weekend on June 2-3. My son and I had a fun time last year, so I’m happy to hear it is returning. We have few new things planned this year including the release of two tee-shirts (I guess my son and I can have matching attire now). These shirts will be found at D-Street, DisneyQuest and the Movie Cart, all located in Downtown Disney West Side. I’m most excited about the opportunity to meet legendary custom car builder and designer Chip Foose at D-Street from 3-4:30 p.m. on Saturday and Sunday. Chip created four custom paintings placing “Cars” characters in Disney Parks (Michelle Harker first shared those images last year). We will have wrapped canvas giclées and deluxe prints of the four images available. Guests who purchase one of Chip’s items will receive a wristband to meet him that day (queue will be formed starting at 2:30 p.m. in front of D-Street).

Speaking of D-Street, we recently released a Vinylmation series featuring characters from “Cars.” This new series is presented on a new Vinylmation form – the classic Disney monorail. Currently, it’s the only series planned for the monorail form (you can find it online). I spoke with the talented artist Maria Clapsis who created the artwork for this set about her experience.

“Creating the artwork for this new series was a fun challenge,” said Maria. “By its nature, the monorail form is boxier compared to the organic feel of the classic Mickey Mouse shape. I really had to breakdown the character designs to fit the shape as seen with the Francesco Bernoulli figure. Overall, I’m happy with how the series turned out.”

Finally, while it won’t be available during this weekend’s festivities, I have an updated release date for the recently announced Vinylmation 95 form. There will be a new create-your-own blank figure being released on June 15 at Disneyland Resort and on June 29 at Walt Disney World Resort.