This weekend, I put on my big sunglasses, my pink fedora and channeled my inner Nora Ephron and headed to Hollywood to be a director! Well, not exactly Hollywood, but to Disneyland Resort to a film shoot at the soon-to-be-opened Cars Land! Disneyland Mom Amanda Ficili and I spent the weekend filming some fun segments for the Disney Channel. Also making her TV debut was Amanda’s adorable daughter, Princess Bella. Yes, that’s her real name and she works it! 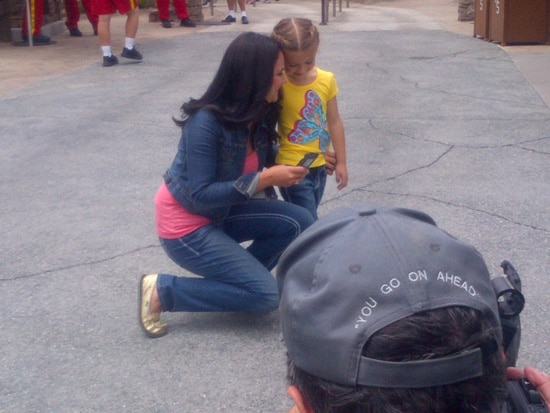 Amanda and I also were able to spend the day with her co-star, Cole Pendery, “Disney 365” star and member of the up-and-coming band, “IM5.” Both Amanda and I kept telling his mom that he was the sweetest, most well-raised young man we had ever met. There is no doubt that in the near future, his poster will be on my daughter’s wall.

Since the filming took place in Cars Land, we got an early sneak peak into one of Disney California Adventure park’s newest and most exciting lands! I won’t spoil all the secrets, but everything there exceeded my expectations. I even got to take a ride on the new Radiator Springs Racers attraction, a dream come true for me. A fast race car, a pink dress, high heels and the sunshine of the West Coast. That’s California dreamin’ my way!

Cars Land opens to the public this week. Let me know if you loved it as much as we did!