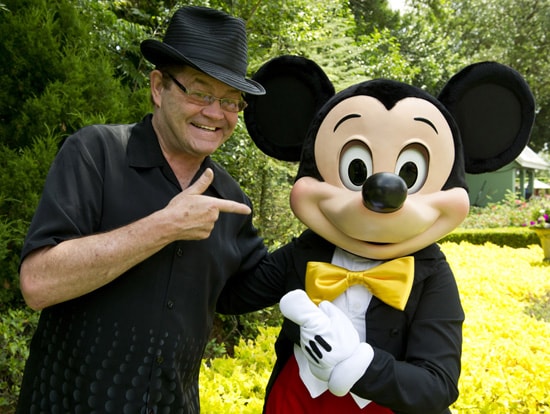 Last month, The Monkees’ original lead singer Micky Dolenz took Epcot by storm (and I don’t mean the weather). From the enthusiasm of the delighted guests at the three shows I attended, it looks like there might be a new Flower Power Concert Series tradition!

From the road, where he’s headlining in the “Happy Together” classic rock and roll music tour, Micky sends his sincere thanks to Walt Disney World Resort guests and cast members. “Everything is so great there,” he told me. “The people are so efficient, the sound equipment is excellent — and the food is terrific.”

Micky is particularly grateful that everyone accepted him in place of his Monkee “brother,” Davy Jones. He was touched that his friend Peter Noone also paid tribute to Davy in earlier Epcot shows.

It was a homecoming of sorts for Micky, since his sister Coco joined him onstage and since he’s been a Disney fan since childhood. “As long ago as I can remember, I loved the Mickey Mouse Club; I had a terrible crush on Cheryl Holdridge and of course, Annette Funicello [who later appeared in The Monkees theatrical film, Head].

Did you see Micky at Epcot? Want to see him back next year? If you can’t wait, he may be coming to your town on the Happy Together Tour this year.

And if you want to keep live rock and pop at Epcot, you’ll want to check out the Sounds Like Summer Concert Series, now through July 28 at the America Gardens Theatre in World Showcase.

Sounds Like Summer presents the very finest tribute bands that recapture the authentic musical qualities of classic rock bands with spot-on precision and artistry. I got a chance to talk with Dicky Lee, guitar player for one of the most popular, Hotel California. They’ve just wrapped another well-received week performing the music of The Eagles at the America Gardens Theater.

“We get more email for our Epcot shows than anywhere else in the country,” he said. “Everything is state-of-the-art all the way. Each note and nuance has all the clarity and brilliance that can be achieved with today’s advances in sound.”

From the sounds of The Eagles and The Bee Gees to The Police and Bon Jovi, the impact of great music, expertly performed, is impossible to measure. As Dicky says, “This music is the sound track to a lot of people’s lives. Giving them the opportunity to go ‘back there’ for a moment is a source of joy.”

Check out more news from Epcot in the posts below: