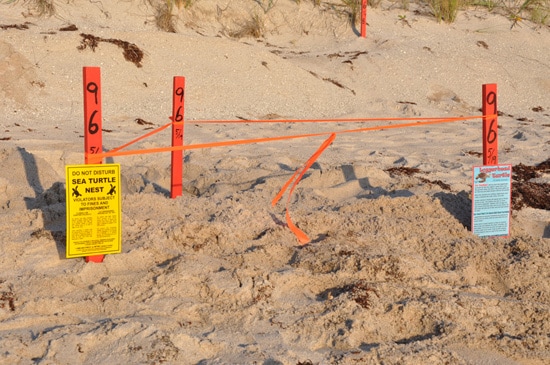 There is nothing more spectacular than watching a female sea turtle who has been swimming in the ocean for 20-30 years decide that it’s now time to lay her very first clutch of eggs on the beach. Not everyone has the opportunity to see a nesting turtle (of course, it’s important that we not disturb them), so how about you follow me on a nighttime walk on the beach?

It is a lovely, breezy night on the beach near Disney’s Vero Beach Resort a couple of weeks ago as I start my walk. It’s overcast, the waves are calm, and there are not very many people on the beach, which means it should be a good night for sea turtle nesting. With night-vision goggles around my neck, I’m ready to look for a sea turtle that is going to make her way from the water to the dune to lay her eggs.

But for hours there’s nothing … not even a hint of a sea turtle head emerging from the water. I keep walking. Still nothing … at least it is a nice night to look at the stars. You can see so many more stars by using the night-vision goggles, and I tell myself that this is great exercise. Several hours later: still walking and not a single sign of a sea turtle. What is going on?

Finally, I see a loggerhead sea turtle! I do believe that “Cinderella” is a fitting name for this late princess — Cinderella didn’t make it home from the ball by midnight, and Cinderella the sea turtle didn’t make it up to the beach until after midnight — 1:28 a.m., to be exact! She slowly makes her way from the ocean, pulling her 200+ pound body through the sand — her shell is almost three feet long. It’s hard work for a turtle who is so buoyant in the ocean to crawl up the beach! She stops frequently to take a breath and then moves near the dune. Once she finds a spot in the sand, Cinderella begins to dig her nest chamber using just her back flippers! It’s amazing to think she can create a nest without being able to see what is going on! At about 2 a.m., she begins to drop eggs into the egg chamber. The nest chamber is about two feet deep — so why don’t the eggs break as they fall to the bottom? It’s because sea turtles eggs are not hard shelled, but rather soft like very thin leather. Cinderella is filling her nest chamber with a lot of eggs. Loggerheads typically lay between 100-120 eggs in each nest!

Once she finishes laying her eggs, she uses her back flippers to gently put sand around the eggs, and then covers it to disguise it from predators by spreading lots of sand around with her front and back flippers. It’s 2:30 a.m. when she finishes and heads back to the ocean. She doesn’t leave a glass slipper behind, but she does leave a nest full of eggs that should hatch in approximately 60 days.

One week after Cinderella left her nest, tropical storm Beryl reached Vero Beach. With the large storm surge, Cinderella’s nest was washed over with waves, but don’t worry, the nest is doing just fine, with just a little seaweed as a reminder of how high the waves can reach during these tropical storms (perhaps her fairy godmother waved her magic wand!). We’ll do a follow-up post on the Disney Parks Blog in July and let you know how many hatchlings emerged!