All in the Details: A Castle Fit for a…Mermaid in New Fantasyland at Magic Kingdom Park

When I think about the New Fantasyland expansion, what gets me most excited is that Walt Disney Imagineering (WDI) is adding two Disney castles to the park – Beast’s Castle, which houses Be Our Guest Restaurant, and the one pictured below, Prince Eric’s Castle, which tops off the Under the Sea ~ Journey of The Little Mermaid attraction. While we’ve showcased pieces of this castle in previous posts, here’s the first complete look at Prince Eric’s abode. I have to say when I first saw the rendering for this attraction, I had no idea it would possibly turn out to be this amazing! 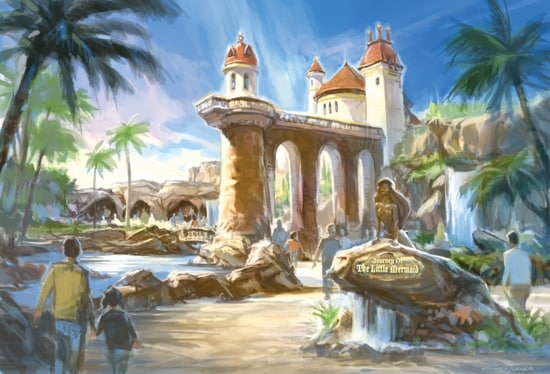 Just like Beast’s Castle, Prince Eric’s Castle uses the forced perspective technique for which WDI is famous to make the structure appear much larger in size than it is in reality.

Forced perspective, which has been used since Walt Disney oversaw the construction of Disneyland park in the 1950s, is sort of an optical illusion that uses architectural scale to “trick” the eye into believing a building towers above you, when it’s really not as tall as you’d think.

So I have to ask, which of these new castles do you prefer – Beast’s Castle or Prince Eric’s? (Visit this post for a look at Beast’s). I have my favorite. Share yours in the “comments” section below!

Read more posts in the “All in the Details” series from Walt Disney Imagineering:

Likes (2)
Share All in the Details: A Castle Fit for a…Mermaid in New Fantasyland at Magic Kingdom Park