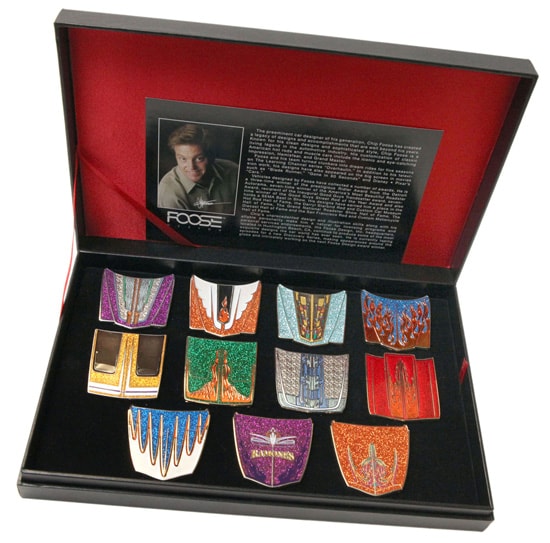 In June, I visited Cars Land at Disney California Adventure park during a short vacation to the Golden State. Wow! I was beyond impressed with this new land (and equally as impressed with Buena Vista Street, where I enjoyed dancing to the music of Five & Dime!). One thing I loved in Cars Land was the details, such as the car hoods found at Ramone’s House of Body Art. The hoods were designed by legendary custom car builder and designer Chip Foose. He enlisted the help of Swedish artist Ray Hill to create the 11 hoods (which, according to Chip, each have a hidden Mickey in their designs). You may recall my fellow Disney Parks Blog author Kathy Mangum discussed the work that Chip and his team did for Cars Land. Apparently, I wasn’t the only one impressed with his work. Julie Young, Product Developer for pins, told me that one car hood in particular served as inspiration for a new limited edition pin set arriving August 2. “I first saw an image of the ‘Ramone’s’ car hood during a meeting about Cars Land construction,” explained Julie. “As soon as I saw the image, I thought it would make a great pin. For many pins I develop, I like adding characters to the artwork. These 11 car hoods, however, don’t feature characters, as I think they are iconic enough to be their own characters.” 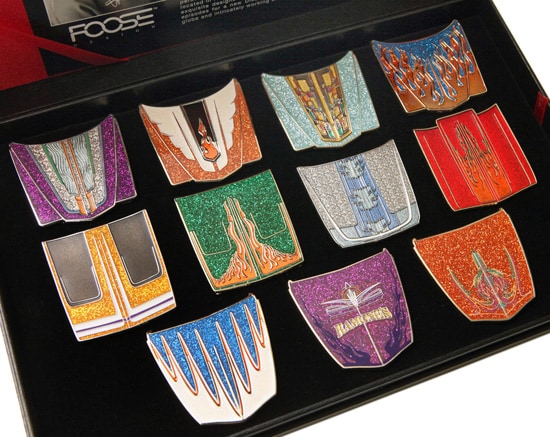 Julie worked with artist John Henselmeier to create the pin artwork inspired by car hoods. You may recall John from recent discussions about the merchandise he designed for the 30th Anniversary of Epcot. I think my favorite hood is the one pictured in the top row, third from the left. The colors used for that one are beautiful!

The set will be released at Ramone’s House of Body Art, Radiator Springs Curios and Elias & Co. in Disney California Adventure park, and at Disney’s Pin Traders in the Downtown Disney District. The set has an edition size of 500 and a retail of $165.00.

Check out these posts for more news about Disney pins: