Last summer, I was reflecting on winter temperatures when I shared a look at Mouseketeer ear hat-inspired ornaments. As summer has recently descended on the Sunshine State, I’m again thinking about cooler temperatures with a first look at new ear hat ornaments. Aaron Babcock, Product Developer for seasonal merchandise, told me that last year’s ornaments were so popular that they expanded the collection.

“We were thrilled with the response from our guests about the porcelain ear hats,” said Aaron. “This year, we have significantly expanded the assortment to include hats inspired by villains, princesses, classic characters and even Pixar characters. We’ve also added a tremendous amount of detail to each new ornament.” 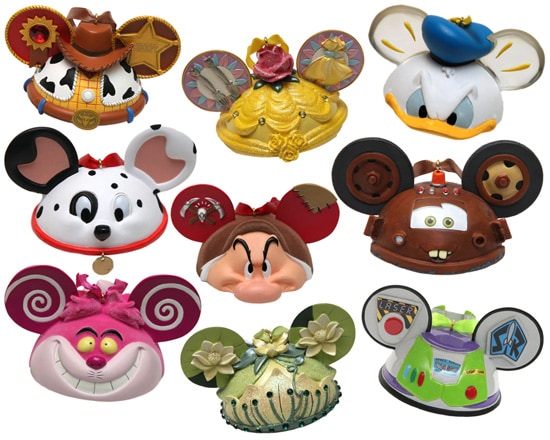 There are approximately 40 new ear hat ornaments. The majority of the hats were designed by Disney Design Group artist Costa Alavezos and professional intern Derrick Lirette. Artist Cody Reynolds contributed the princess ear hat designs. I spoke with Costa about the details found on the ornaments.

“This year, we made the ornaments out of resin,” explained Costa. “This material allowed us to capture lots of details. By using resin, we could add glitter, decals and other embellishments that can’t be added to porcelain. I was delightfully surprised to see the final hats as each hat has such personality.”

The hats will be introduced to Disney Parks in the coming weeks. They will also be found via the online Disney Parks Store. The best places to find them at Disney Parks are Disney’s Days of Christmas and World of Disney at Downtown Disney Marketplace in Florida, World of Disney in the Downtown Disney District in California. They will also be found in the Emporium location found on Main Street, U.S.A. in Magic Kingdom Park, and the China Closet location in Disneyland park. 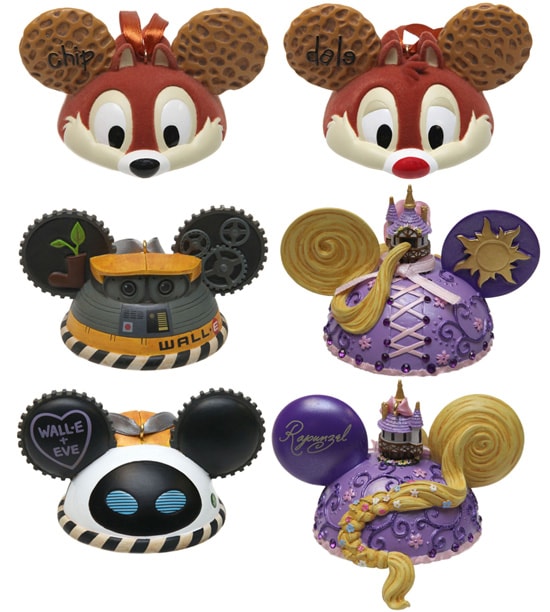 One detail I love is how the artists used the front and back of each hat (best seen with the Chip and Dale or WALL-E and Eve hats). I also thought the Princess Aurora design was clever (pink dress on one side and blue dress on the other). Rapunzel’s extra long hair was a nice touch.

Each hat is limited edition with the exception of the princess collection. Aaron said to watch for additional holiday and fashion-inspired hats coming in the next few months.

Get more news about upcoming merchandise at Disney Parks in the posts below: