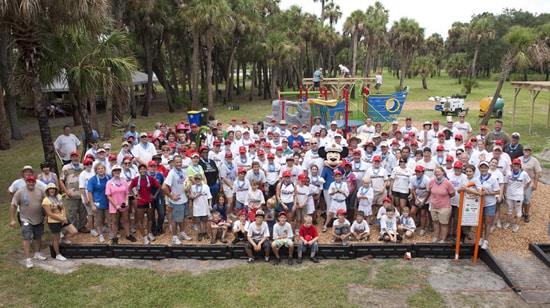 Disney Cruise Line Builds a Nautical Playground in One Day!

More than 150 Disney Cruise Line VoluntEARS joined an additional 150 volunteers from the City of Rockledge to construct a playground in Rockledge, Florida, this past weekend.

In cooperation with KaBOOM!, a national nonprofit dedicated to preserving play for children, the group labored in the heat and humidity, transforming an empty 40-by-60-foot piece of property into a children’s wonderland of slides, climbing walls and zip lines.

Disney Cruise Line Builds a Nautical Playground in One Day!

Crew Members from the Disney Fantasy joined in the effort, coming off of the ship in nearby Port Canaveral to roll up their sleeves while the ship was in port.

Disney is a KaBOOM! National Partner, supporting its vision of safe play places within walking distance of every child in America. Since 2011, Disney has pledged more than $3.5 million to help build playgrounds and gardens across the country with the participation of thousands of Disney VoluntEARS. By the end of the year, Disney will have helped KaBOOM! build nearly 30 playgrounds nationwide!

Although the heat was sweltering and our Disney VoluntEARS shirts got a bit “grimier” than we’ve ever seen them before, we were proud to contribute to something that will bring joy and happiness to families for many years to come.

Check out these past posts about our Disney VoluntEARS: