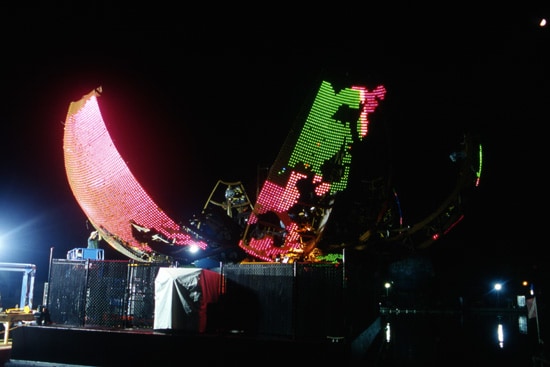 After 70 days, the Torch Relay will culminate tomorrow night when the cauldron is lit at the opening ceremonies of the London 2012 games.

While the torch may be one of the most recognizable symbols throughout the world, Epcot has a few torches of its own that are seen by guests every day.

Every evening in IllumiNations: Reflections of Earth, the Earth Globe opens to reveal a giant torch for the finale. Here’s a look at the 350,000 lb. Earth Globe still under construction back in 1999.

Inside the American Adventure theater, in the show’s final scene Benjamin Franklin and Mark Twain share a handshake in front of another recognizable torch both in Epcot and throughout the world. Below is a look at an Imagineer programming the attraction prior to opening in April 1982.

While my athleticism most likely won’t translate to me carrying the torch in my life, rest assured I’ll still be looking to see who the final torch bearer is tomorrow night.

Check out the posts below for more on the upcoming Summer Games: