Earlier this month, I had the opportunity to attend D23’s Destination D at the Disneyland Hotel. I listened to a fascinating presentation, “Animating the Disney Parks,” featuring Eddie Sotto and Imagineers Tony Baxter and Tom Morris. Each Imagineer shared the story of how legendary Disney animators and artists became the first Imagineers during the early development of Disneyland and then the Walt Disney World Resort. Tony Baxter, Walt Disney Imagineering senior vice president of creative development, got the discussion started with the story of his mentor, Claude Coats. Originally in 1935 as a background painter, Coats created the worlds of “Pinocchio,” “Alice in Wonderland” and “Lady and the Tramp.” His backgrounds created a sense of place, Baxter said, much like WED Enterprises (later Walt Disney Imagineering) would do in theme parks.

When Walt Disney was creating Disneyland, the talents of his animators were needed for this new medium. As Baxter recalled, Coats’ experience working on “Lady and the Tramp,” especially, gave him the inspiration to look at the world from an altered perspective – inspiration that would later lead to real-life experiences like Storybook Land Canal Boats and Adventure Thru Inner Space.

“Disneyland defined the ability to take you out of the world you live in,” Baxter said.

Coats was trained in architecture, Baxter said, which gave credibility to the environments he created. When the scenes for Pirates of the Caribbean were being developed, it was Coats who had the idea to paint the ceiling black, creating the illusion of a night sky and making the ceiling disappear – giving guests the sense of being outside at night. 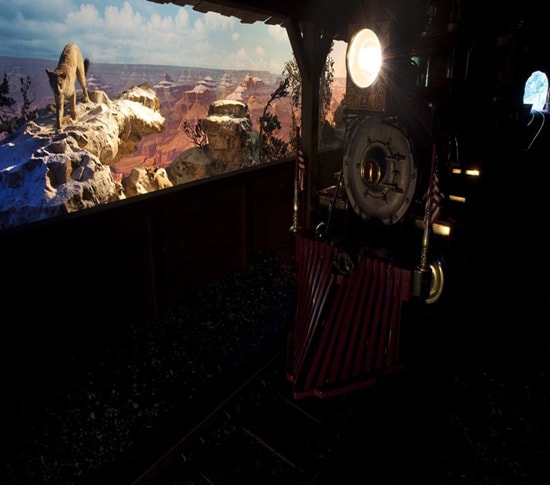 You can see Coats’ background painting talents for yourself today in the Grand Canyon Diorama and Primeval World along the Disneyland Railroad.

Check back for more from “Animating the Disney Parks” – next time, we’ll focus on another master of creating a sense of place, Herb Ryman.