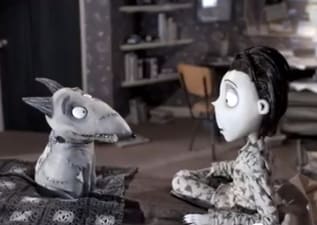 Calling all you Tim Burton fans! In addition to Haunted Mansion Holiday, guests will be able to step into another world of award-winning film director Tim Burton when “The Art of Frankenweenie Exhibition” comes to Hollywood Land during Halloween Time at the Disneyland Resort. From September 14 – November 5 at Disney California Adventure park, you can see the touring art exhibit, along with a special, extended sneak peek of Tim Burton’s animated feature film, “Frankenweenie,” releasing on October 5.

“The Art of Frankenweenie Exhibition” captures the magic of filmmaking and gives an exclusive glimpse into the stop-motion animation process brought to life by visionary filmmaker Tim Burton. From original sketches drawn by Burton to extensive props, sets and puppets, the exhibition showcases the artistic detail and vision that has gone into telling the tale of a boy who, inspired by science and the love of his dog, brings his beloved pet back from the dead. Here’s a quick peek:

The exhibition launched in Barcelona, Spain, at CineEurope on June 18, and stops in the U.S. at the Disneyland Resort from September 14 – November 5. When the tour is complete, it will have visited seven countries including Spain, France, England, Japan, Mexico, Canada and the U.S.

Be sure to catch “The Art of Frankenweenie Exhibition” during Halloween Time at the Disneyland Resort – which also includes Haunted Mansion Holiday, Space Mountain Ghost Galaxy and more!

Check out how we are preparing for Halloween at Disney Parks in the posts below: