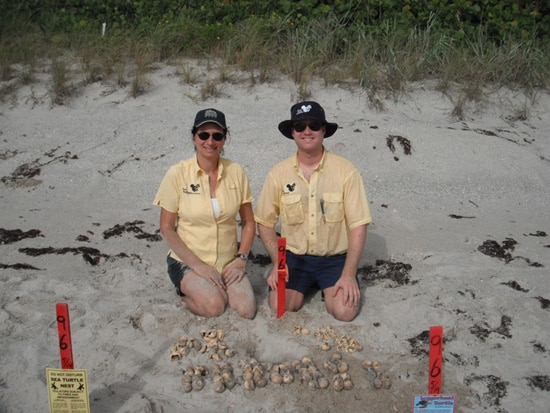 Sea turtle nesting season (May to October) is a hubbub of activity at Disney’s Vero Beach Resort, and the past couple of weeks have been no exception. In today’s blog post, I’m excited to share news on Cinderella the sea turtle’s nest and this year’s Tour de Turtles, as well as an amazing video of hatchlings emerging from their nest and heading to the sea.

The race is on in Tour de Turtles. Last Saturday morning, more than 500 Disney’s Vero Beach Resort guests cheered as two loggerhead sea turtles, who had laid their eggs on the beach the night before, returned to the sea. The turtles were fitted with satellite transmitters and released on the beach near the resort as part of the Sea Turtle Conservancy’s annual Tour de Turtles event. The first turtle to swim the farthest will be declared the winner. The turtles are named after characters in the Disney•Pixar film “Finding Nemo.” Peach is sponsored by Disney’s Animal Programs and Disney’s Vero Beach Resort, and Pearl is sponsored by the Disney Worldwide Conservation Fund and Friends for Change.

Researchers from Disney’s Animal Programs and the Sea Turtle Conservancy will track the sea turtles using satellite telemetry as they travel from their nesting beach to various feeding grounds. Using this technology, scientists learn about sea turtles’ habits at sea and the different migratory patterns of each species. This knowledge helps researchers, conservationists and governing agencies make more informed decisions about sea turtle conservation actions and policies. Guests can find out about this research and follow the tracks of the turtles when they visit the Wildlife Tracking Center in Rafiki’s Planet Watch at Disney’s Animal Kingdom. People worldwide can view the sea turtles’ progress online at www.tourdeturtles.org.

Readers of the Disney Parks Blog will remember that a June 6 blog post told the story of Cinderella the sea turtle, who came up on the beach very late one night (after midnight, hence the name Cinderella) near Disney’s Vero Beach Resort to lay her eggs. I promised to provide an update on the nest to report on how many hatchlings emerged. Cinderella’s nest is one of hundreds that Disney’s Animal Programs cast members monitor during sea turtle nesting season at Disney’s Vero Beach Resort. Cast members are marking new sea turtle nests daily, as well as monitoring existing nests until they hatch. Well, it was quite a summer for Cinderella’s nest. In late May, Tropical Storm Beryl washed over the nest. In early June, a large ghost crab took up residence a few feet from the nest, but, fortunately, didn’t do any digging at the nest site. In late June, Tropical Storm Debby washed over the nest. Sea turtle nests are quite vulnerable to tropical storms and hurricanes, as they are likely to be inundated with water, which can harm the eggs. Cast members monitoring Cinderella’s nest in early July found a leatherback sea turtle hatchling that had been caught up in fishing line washed up on the beach. They freed the hatchling from the fishing line and released it at night, when it was cooler and the hatchling would be safer from predators.

Finally, in late July, the eggs in Cinderella’s nest hatched. We inventoried the nest, and she had a total of 121 eggs in the nest — 55 hatched and 66 didn’t. Why the low number of hatchlings? Well, Tropical Storm Debby seemed to have had an effect on her nest; she laid her nest in an area that received a lot of wave action over her nest, but still those 55 hatchlings made it to the ocean. That same day we inventoried another nest that was laid in the sand above Cinderella’s nest, and it had 123 eggs, of which 118 hatched and only 5 didn’t. Here is some video footage taken with special night vision equipment of hatchlings emerging from the nest. As for the hatchlings, you can see that we were very careful not to interfere with their ability to reach the ocean safely. We are excited to share this video of one of nature’s most amazing wonders. Enjoy!