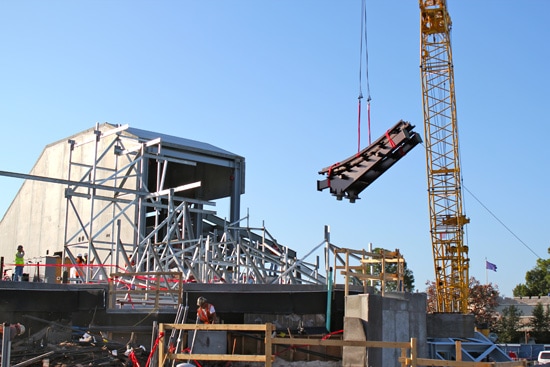 All in the Details: First Track Laid at Seven Dwarfs Mine Train at Magic Kingdom Park

Earlier this month, our friends at Walt Disney Imagineering celebrated a milestone in the New Fantasyland expansion with the laying of the first piece of track in the Seven Dwarfs Mine Train attraction.

The attraction, which is set to open in the park in 2014, will take Magic Kingdom Park guests on a musical ride into the mine “where a million diamonds shine.” The coaster will feature an innovative ride system with a train of vehicles that swing and respond to every twist and turn of the track. The journey will be accompanied by music from the classic Disney film and animated figures of Snow White and the Dwarfs.

Speaking of Snow White, actress Ginnifer Goodwin, who portrays Snow White on the ABC television show “Once Upon A Time,” recently took the time to share her excitement about the New Fantasyland expansion in this video clip:

And just a reminder for you fans of “Once Upon A Time” – season two returns to ABC this Sunday at 8/7c.

Read these posts for more about New Fantasyland:

Likes (0)
Share All in the Details: First Track Laid at Seven Dwarfs Mine Train at Magic Kingdom Park